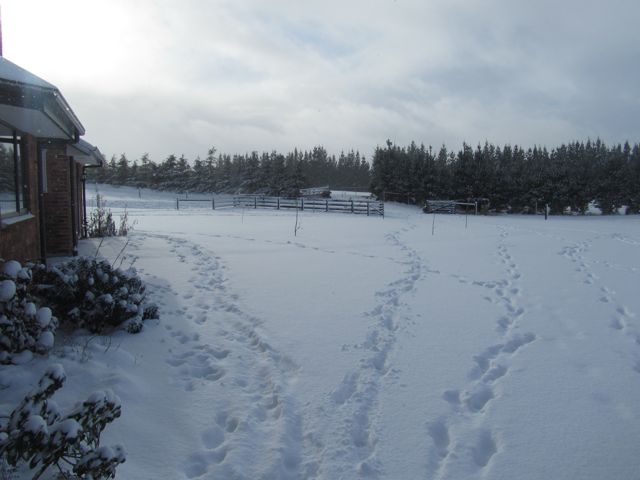 Snow is reportedly falling over parts of Dunedin this morning as the wintry outbreak begins to gradually wind up and advance over the South Island.
This is day 1 of an event that could possibly last up to 4 days and it’s organising itself slowly with snow still expected over much of Otago and Southland this morning and then wintry and snow showers moving north over Canterbury later this afternoon and evening.
The low is centred more than a 1000km east of New Zealand however the impact is still being felt over the country as the wheels of it slowly start to turn and deliver very cold air.

“It’s all about timing as this mass of cold air revs up today and we are still expecting snow to low levels and sea level over parts of the south and east of the South Island and its just gradually moving over the lower parts of Southland as we speak first thing this morning” says Weather Analyst Richard Green. ” This initial surge of cold air with snow in the mix may not reach all areas today and whiteout conditions mightn’t occur for some however the next wave is still likely to be more widespread and heavier ” Richard Green says.

Conditions are expected to be bleak for both North and South Islands over the next few days with pulses of cold air seeing snow to very low levels and potentially causing transport problems for a number of areas.
“The wind overall today is more southwest but as it tends to the south over the next day or 2, more eastern areas are likely to see snow and the impact should be more noticeable” according to Richard Green.
” The gusty conditions will make this event feel even colder down here than 3 weeks ago and overall it’s expected to be stronger but farmers have had significant amounts of time about the potential wintry period so they should be well prepared” Mr Green says.

Many supermarkets, petrol stations and firewood suppliers reported extremely busy times in Canterbury yesterday as residents stocked up on supplies in preparation for a very cold week.
WeatherWatch believes that the North Island will see some heavy falls of snow throughout the week and down to very low levels in the south and east and also central areas.

We missed out on snow last time when it hit Chrsitchurch and had slight snow this afternoon.

Will it be snowing out here tonight/tomorrow? Thanks

snow falling lightly most of the day in western Southland, but certainly nothing like the July event yet.

Hello there all you lucky guys getting this snow. Where is ours? Talk about  four seasons in one day in Dunedin. All sounds like fun.

I have all my gas cooking equipment  ready to go incase we get a good dump and lose power which is what usually happens here.

Weather Watch can you tell me what we’re expected to get here in Fairlie (like Wananka we’re forgotten) as Timaru and then us 60k’s inland is like chalk and cheese.

What’s the chances of any snow showers etc hitting Blenheim.In the July storm it was kinda forecasted but didn’t eventuate.This time around it’s been mentioned again..i will say that it feels alot colder now than at anytime during the July storm.Have heavy rain at the moment..and i think there was a small touch of hail as well.

Just had a heavy snow shower in Abbotsford DN and have gone from nothing to a 1 cm cover on the lawn. Dunedin City had hail and then snow and the roads were getting tricky. Temp is about 1 deg

Showers in Abbotsford DN more frequent and fine spells shorter. If you need info on flight status of airports go to Air New Zealand cancellations on their web site http://www.ifids.airnewzealand.com/transform?cursite=www.airnz.co.nz&transform=FISA&type=a&airportcode=AKLD

Nothing lying on ground yet but has definitely deteriorated with snow showers and very cold.