Cold blast hits Sth Is; Rain warnings for Nth Is 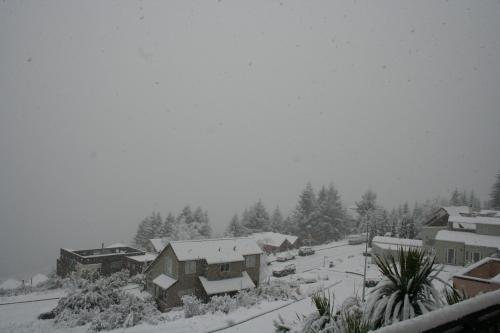 The centre of a deep low from the Southern Ocean is this hour at its closest to the lower South Island as it brushes Foveaux Strait.

Meanwhile MetService has extended weather warnings into the North Island with heavy rain on the way for Bay of Plenty, Rotorua, Gisborne & Hawkes Bay.

Temperatures continue to remain winter-like right over the lower half of the South Island with colder air yet to arrive.

A near-gale westerly, gusting to 90km/h, is blasting Southland and Invercargill.  The temperature is just 6 degrees with a southerly expected to arrive this evening once the low shifts further east.

WeatherWatch.co.nz believes snow may fall to very low levels about Southland and may affect several state highways, asking motorists to watch out for sudden snow flurries or heavy hail storms.

Head weather analyst Philip Duncan says farmers should be moving newborn stock to shelter as wind chills plummet below zero.  “This is a wintry blast more typical of mid-winter not October.  While it will be relatively short lived the wind chill may be severe and long lasting enough to be fatal to new born lambs”.

Mr Duncan says a large high moving in tomorrow and Monday may bring widespread frosts to the South Island, posing a concern for grape growers.

Queenstown and Wanaka have spent much of the morning around 1 degree but have now warmed up a little to around 5.

It’s a different story in the North Island with warm nor’westers from eastern Australia keeping temperatures up around the 20 degree mark.

The warmest centres are Hastings with 22, Gisborne with 21 and Whangarei, Tauranga and Napier with 20.

“Even though New Zealand is a relatively small country it’s quite amazing how wildly different the temperatures can be across each island” says Mr Duncan.

It’s nice in Christchurch at the present. Just had some rain but very brief, sunny and windy. Around 15 degrees.