CNN: Why we have weather on the brain 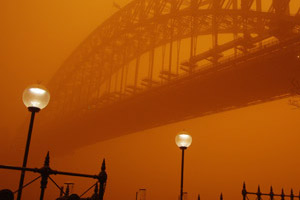 We live in air-conditioned houses and work in climate-controlled offices. Our fields are precisely irrigated, our rivers rimmed by levees and floodwalls, our buildings constructed on flexible foundations. We have three-dimensional Doppler radar, ultra-powerful weather satellites and seismographs that register every jolt and growl of the Earth’s crust.

And still, we react much as the ancients did when faced with the unpredictability of weather: with fear, awe, adrenaline and fascination.

“This is something evolutionary,” said Andy Niemiec, a professor of psychology at Kenyon College in Ohio. “In history, we’ve learned that weather is something to be if not feared, then perhaps in awe of. And I think a lot of that has to do with the sort of sensory signals that … probably even activate unconscious parts of our brain.”

Recent headlines — including flooding in Tennessee caused by record-breaking storms, tornadoes in the Southeast, mammoth snowstorms this winter and earthquakes in Haiti and Chile — have brought these emotions to the fore.

Our ancestors lived in the open and picked up on the dangers of some weather events, with impulses to “seek shelter, go hide, whatever,” he said. More recently, when humans developed agriculture, we learned the effect weather cycles could have on growing food — on our very survival.

Out of those observations some civilizations created gods and rituals, says Clay Farris Naff, a science journalist who frequently writes about science and religion for the Huffington Post and the interdisciplinary Metanexus Institute.

The ancient Egyptians, for example, appealed to the god Osiris to maintain the rhythms of the Nile, and the Mesopotamians had a host of gods related to agriculture. Today, we understand weather through science, but we still don’t control it, which is why some people still ascribe weather’s volatility to the supernatural.

“Nature is just not something that we have entirely figured out how to tame, though we’ve gone a long way in making it conform to our wishes,” Naff said.

Indeed, the immediacy with which we experience weather nowadays may play into our fears, CNN meteorologist Chad Myers says.

“Now, we know so many things about the weather that we anticipate the weather more than we actually ever have to have a problem with it,” he said, observing that his mother worries about tornadoes after seeing a warning on CNN, even if the storm is hundreds of miles away. (The opposite is true for some people, Niemiec says: The constant drumbeat of weather coverage can be desensitizing.)

Technology has also played a role in prompting us to see patterns where none may exist,. Though the recent string of earthquakes may seem unusual, it’s our awareness of the tremors which has changed, Myers says.

“Eight years ago, we would never even have reported [most tremors]. Now, it’s reported, and the media picks it up, and … everybody’s Twittering about, ‘Oh, I felt the Earth shake. Is there going to be more?’ Our sensitivity is extremely high,” he said.

Indeed, humanity is fond of looking for patterns where none exist, Niemiec says, a concept called illusory correlation. (For example, you wash your car and then it rains.) But one reason we’re so aware of earthquakes or other natural phenomena is because we see the human cost, he observes.

“It’s not completely irrational that people are having these thoughts, because usually when these things happen, no one’s injured,” he said. “But in this case there have been injuries, people have lost their lives, and I think people identify with the idea that, ‘Oh, that could have been me.’ “

The ultimate point, suggests Naff, is to have humility in the face of nature. Science can help us understand weather; spirituality to respect it.

After all, Niemiec says, our fear of weather is the reason we’re still here. Even in our air-conditioned, climate-controlled worlds, weather makes itself known, as it did when some trees nearly hit the professor’s house during a windstorm.

“You think you’re in there and you’re safe, but if [the trees] had gone five or six feet the other way, this would have been it,” he said. “[At times] we do sort of get desensitized, but then a big event happens, and it brings it right back. A healthy respect for those kinds of conditions have led to our survival as a species, and you wouldn’t really want to lose that.”

– CNN has some spectacular weather photos, which you will find here