Home > News > Cloudy and cool in the east tomorrow, ni...

Cloudy and cool in the east tomorrow, nicer out west 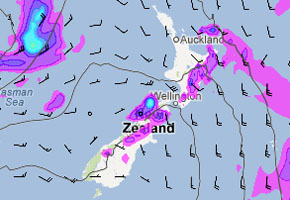 Tomorrow our forecasted front will brush eastern coastlines in the south and north delivering a period of showers for most regions. Showers will have cleared Southland by tonight and Otago by morning tomorrow, then clearing around midday tomorrow in Canterbury then further north in Marlborough by evening. The east coast of the North Island will see conditions deteriorate around midday and showers or drizzle patches clear later at night.

Out West most areas will be sunny as the flow goes easterly or southeasterly, perhaps some morning cloud clearing. Overnight tomorrow, Northland will start to see some cloud and the chance of a few showers as the southeasterly airflow catches the top of the country. This as a result of the new incoming anticyclone that if some may remember is a bit more beefier then the current one out west today benching 8 hectopascals more at its centre.

Now I am a bit of a thunder man, a thunder god would be preferable but can’t aim too high, so where are the next thundery chances going to appear? Well there isn’t too much to go by as this anticyclone will keep things rather settled, however on Saturday there may be a few isolated showers develop about Central Otago due to some surface heating and cooler upper air. Chances are the clouds will not go thundery however it does have that convective element there.

Then mid next week a nice pool of cold air may come over the country so that could provide our next shot at thunder, I won’t be too specific there though as it is a while out but something to keep an eye on.