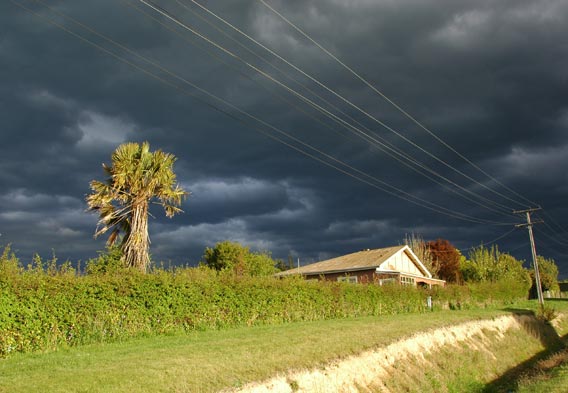 A new week and certainly a change in the weather pattern with rain, heavy in places, thunderstorms and hail also a possibility in the south.

It’s all coming thanks to a frontal system moving towards the country and this one seems to be packing more of a punch than initially thought.

We’ve discussed this event in recent days however it seems to have grown in intensity and northern, western and also southern regions are in the firing line.The upside is that it’s mostly shortlived and some areas won’t see the worst of it until later today or tonight.

Weather warnings have been issued by MetService with a number of watches as well.

Winds from the northwest are also set to buffet central New Zealand with the highest gusts about Wellington and the Wairarapa.

Eastern areas of the North Island will see more heat today and a few falls of rain may drift off the western ranges to affect other areas of Hawkes Bay.

Eastern parts of the South Island could see thunder rattle through with localised heavy downpours and hail also in the mix.
“it’s a tricky one to accurately predict but there’s a chance if all the key ingredients come together that a southerly squall could produce brief fireworks” says Weather Analyst Richard Green.
“After weeks of hot and dry conditions this could certainly be a turnaround however the rock hard ground could struggle to soak up all the moisture if some heavy falls hit” he said.

Head Weather Analyst Philip Duncan isn’t entirely sure if the rain over the Auckland area will see the fire ban lifted. “Even though there could be some decent falls it’s not hanging about for that long it seems but any rain is certainly welcome”.

Tomorrow shows an improvement for most of the country however some rain or showers are going to take a while to clear the country entirely.A drop in temperature is expected almost everywhere as cooler air from the south covers the nation.

Waitangi Day is still looking mostly settled but the odd shower could hang on over the Far North despite an anticyclone increasing its grip over the nation.

Whats WW’s prediction like for thunderstorms in Christchurch – are we likely to see any activity? How much?! Cheers.

We’re seeing a southerly change with a band of rain later and a 40% chance of thunder and 30% chance of hail at this point.

hi there whats the chances of thunderstorms in auckland today?

yes its welcome here too,plants dry. sure is “piss” ability 🙂

Have a good one!