Home > News > Climate change needs to be treated with ... 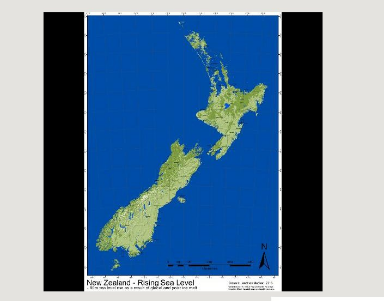 A leading climate scientist has welcomed a new 20-year Government “roadmap” that singles out climate change as an environmental research priority for New Zealand.

But Dr James Renwick, of Victoria University of Wellington, argues the issue could have been treated with much more urgency in the discussion document, which is now out for consultation.

In the paper, released late last week by the Department of Conservation and Ministry for the Environment, climate change was noted as posing a “very significant” impact to the environment, with effects cutting across “almost every aspect of environmental and conservation research”.

At least 2C of warming this century was likely to influence species, habitats, ecosystems, biodiversity, biosecurity, water quality and availability, land use, and primary production.

Climate-related sea level rise would affect coastlines, and changes could be expected in the frequency and severity of natural hazard events, including extreme weather, drought, frosts, wild fires and flooding.

For climate change – one of 12 key research areas identified – the goals were summarised as “New Zealand understands the pathways that can lead to a low-carbon economy that will support its international commitments” and “The impacts of climate change on the environment, economy and society are effectively managed through planned adaptation and risk reduction”.

The document set out a range of research questions, emerging ideas and capability needs, spanning from innovative techniques to slash methane emissions from ruminant animals, to risk-mapping and improved policies.

But Renwick, who is travelling the country in a speaking tour raising awareness around climate change, said where the document was “less impressive” was the language around the scope and urgency of the issues.

“It talks about a future with ‘relatively intact’ natural ecosystems and about the ‘trade-offs’ between environmental protection and economic growth,” he said.

“A recognition that the economy is a component of the environment does not come through in this document.”

He noted the document pointed to a roadmap for the next two decades, by which time the globe’s budget of carbon emissions to keep warming below 2C would be spent, at present emissions rates.

“Yet, the first 20-year vision given under the climate change theme is New Zealand understands the pathways that can lead to a low-carbon economy that will support its international commitments, as if we have 20 years to work out what to do.”

Significant action needed to begin immediately, and emissions had to start coming down as soon as possible, he said.

“While the Government has an Emissions Trading Scheme and is investing in agricultural emissions research, there is no hint that the country’s total emissions are decreasing, or are expected to decrease at any time in the coming 20 years.”

#ClimateChange could have been treated with much more urgency in new Govt paper, argues #VicUniWgtnâ€™s @CubaRaglanGuy https://t.co/GH9KMzwBYV

“Robust science and evidence underpins good decisions about how we care for our nature,” said Conservation Minister Maggie Barry, lead minister for the project.

“We need to be thinking ahead to what issues we’re going to face, and also take a fresh look at how to deal with problems like introduced predators and weeds.”

An independent Strategic Advisory Group, led by the Prime Minister’s chief science adviser, Sir Peter Gluckman, helped develop the paper alongside Ministry for the Environment and Department of Conservation staff.

The New Zealand Association of Scientists (NZAS) meanwhile said it was a “positive step” for the Government.

“The fact that they have developed and released the Conservation and Environment Roadmap first points to the importance of this sector to New Zealand,” its president, Dr Craig Stevens, said.

“The roadmap is, however, very high level so it remains to be seen how it will actually influence front-line science.”

“This is compounded by its release being out of sync with the National Science Challenges which support significant activity and leadership in this area – it will be another three years before these have any significant re-focus.”

Dr Cate Macinnis-Ng, a senior lecturer in biological sciences at the University of Auckland, said she welcomed the “broad scope and wide coverage” of the document.

This is what NZ looks like with 80 metres of sea level rise
Interactive sea-level rise maphttps://t.co/geZor7u1SJ pic.twitter.com/EnBrC3woIg

“On the positive side, the roadmap also highlights some of the opportunities in the environmental space including new technologies and matauranga Maori,” Macinnis-Ng said.

“Better integration of matauranga Maori and tikanga Maori into environmental assessment and management has huge potential for improving environmental and social health for all New Zealanders.

“We all have a stake in the environmental wellbeing of our country and I encourage everyone to contribute to the consultation.”

â€¢ Feedback was welcomed on the discussion paper, available on the Ministry for the Environment and Department of Conservation websites, until September 7. Meetings would be held in Auckland, Hamilton, Lincoln, Dunedin and Wellington next month.

New Zealand had a number of pressing environmental challenges, specifically freshwater issues, invasive pests and ongoing soil degradation. And robust science and evidence underpins good decisions about how we care for our nature.     Both of these statements are great, it’s a pity the second is lost when referring to climate change.

Climate-related sea level rise would affect coastlines, and changes could be expected in the frequency and severity of natural hazard events, including extreme weather, drought, frosts, wild fires and flooding.

Here’s a task for you – look up – (NOAA Tides and Currents) click on (Products) click on (Sea Level Trends) click on (Global) click on (New Zealand) now go through the list of NZ stations and click on (Interannual Variation) for each station. Do the same for global sea level panic sites e.g. Kiribati for instance the rise is 0.58mm per year +/- 0.87mm.   How’s that 80m or even 1m rise looking now.

Extreme weather was worse in the first half of the 20th century e.g. Journal of Geography & Natural Disasters, Trends in Extreme Weather Events since 1900, An Enduring Conundrum for Wise Policy Advice – Kelly MJ Department of Engineering, University of Cambridge, UK.
Also, A Chronology of Notable Weather Events by Douglas V. Hoyt and Climatic Changes of the Past and Present by Erling Dorf 1959 – all online.
Floods.. as the UK Met Office shows in ranked seasonal precipitation – 1766 to 2016 there is nothing new happening.   LOL, read the history you’ll find floods have happened often before and worse, for instance just this year we had climate change panic and floods in France – flood peak 2016 – 6.1m… 1910 8.62m.

Droughts… as the IPCC says, there is low confidence in detection and attribution of changes in drought over global land areas since the mid-20th century – from – Parched Earth Policy, Drought, heatwave and conflict, Andrew Montford… also online.

Fires….from Phys.Org – Wildfire – it’s not spreading like wildfire …global area burned has seen an overall slight decline over past decades, despite some notable regional increases. Currently, around 4% of the global land surface is affected by vegetation fires each year. There is increasing evidence that there is less fire in the global landscape today than centuries ago and direct fatalities from fire and economic losses also show no clear trends over the past three decades.

Oh no…The Arctic Ocean is warming up, icebergs are growing scarcer and in some places the seals are finding the water too hot, according to a report to the Commerce Department yesterday from Consulate, at Bergen , Norway.
Reports from fishermen, seal hunters and explorers all point to a radical change  in climate conditions and hitherto unheard-of temperatures in the Arctic zone.
Exploration expeditions report that scarcely any ice has been met as far north as 81 degrees 29 minutes.
Soundings to a depth of 3,100 meters showed the gulf stream still very warm.
Great masses of ice have been replaced by moraines of earth and stones, the report continued, while at many points well known glaciers have entirely disappeared. Very few seals and no white fish are found in the eastern Arctic, while vast shoals of herring and smelts which have never before ventured so far north, are being encountered in the old seal fishing grounds.
Within a few years it is predicted that due to the ice melt the sea will rise and make most coastal cities uninhabitable.

Sounds familiar doesn’t it only it’s from November 2, 1922, as reported by the AP and published in The Washington Post – 94 years ago.