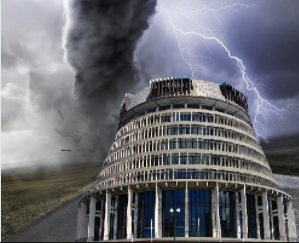 By the Otago Daily Times — Private forecasting company WeatherWatch claims MetService is engaging in ”misleading advertising” and has taken the state-owned enterprise to the Commerce Commission.
The complaint relates to delays in passing on publicly available weather information that allows other forecasting companies to operate.

WeatherWatch managing director Philip Duncan said the difficulty in getting what was supposed to be ”open-access data” was the ”latest frustration” in trying to run a weather business.

In his complaint to the commission, Mr Duncan said open data meant ”data with no delays, no restrictions, no hoops to jump through”.

MetService had a website link to its ”open data”, but it was ”not open” because other people’s access to it was delayed by three to six hours, ”making this data lose most of its value and commercial use”, he said in the complaint.

”Saying they have an open-data page and then placing so many delays around access to that is misleading and clearly false advertising. How are they allowed to advertise something that isn’t true?”

Mr Duncan told the Otago Daily Times it was unfair to hold on to the information until it lost value.

”It’s either open, and we’re all on the same, even, playing field, or it’s controlled by MetService and not open.”

It was just one of many frustrations WeatherWatch was experiencing in trying to compete with MetService and Niwa.

”I’m a small business, struggling 100% due to the Government,” he said.

A MetService spokeswoman said the SOE had not yet been made aware of the complaint by Mr Duncan or the Commerce Commission.

”We are happy to respond to the commission should they be in touch, but have no comment to make at this stage.”

A commission spokeswoman confirmed the complaint had been received.

It would be assessed to determine what happened next. How long that would take depended on how many other complaints were being handled, she said.

Earlier this year, Research, Science and Innovation Minister Megan Woods, said she was going to look into an apparent double-up. New Zealand taxpayers pay millions of dollars a year to support both MetService and Niwa forecasting operations.

She said then she wanted to ”look closely at this and speak to Niwa and MetService to ensure there isn’t undue duplication of roles and effort”.

A spokeswoman for Dr Woods said last week there was nothing new to report.

A Ministry of Business, Innovation and Employment report on public access to Niwa and MetService weather data, released in January, found their restrictions were some of the toughest in the world and might be stopping third-party competition and hamstringing innovation.

Dr Woods said at the time she had asked officials to consider how that data could be freed up.

”I have some concerns around the way the current commercial model operates.”