City of water on ice 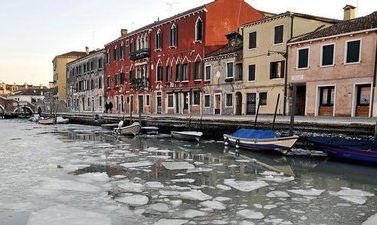 The Cannaregio Channel and the San Giuliano Channel, which links Venice to its mainland urban centre of Mestre, are partially iced because of unusually low temperatures.

Schools were closed in Rome yesterday as Italy coped with heavy snow.

So far, 10 deaths have been linked to the winter weather, including two people who were crushed under a collapsed roof south of Rome, and a 91-year-old woman in the northeast port of Trieste who was knocked down by strong winds.

In the north, rescuers had to pluck people from their homes as piles of snow reached depths of 3m in some areas.

In Milan, Italy’s fashion and financial capital, temperatures fell to -12C yesterday, and the authorities opened a section of the city’s subway to shelter about 100 homeless people.