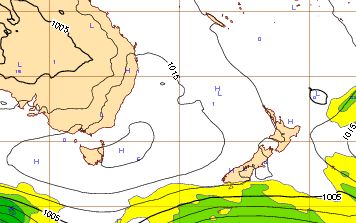 Long range computer models are starting to work out the weather leading up to Christmas and most are pointing towards a large high moving over the Tasman Sea in the week leading up to the 25th.

However WeatherWatch.co.nz forecasters say the tropics are also very active – mainly to our north east – while the Southern Ocean continues to pump out lows which push weak fronts into the Tasman Sea – bringing a fair bit of cloud to the west – and the odd shower.

The high moving in before Christmas looks likely to be dominant – but the long range models still aren’t sure about where the high will be placed for Christmas Day, or if a potential low could impact it.

“We have a lot of dry weather coming in over the next couple of weeks, as we predicted back in November. However there are a few wet days, or days with a few showers in the mix, as well.  Southern Ocean storms have been clipping southern New Zealand while the odd tropical system has been clipping the north” says head weather analyst Philip Duncan. “This pattern looks to continue for a few more weeks”.

Mr Duncan says a wet sub-tropical low is just 20% possible – down from 30% yesterday – while a low from the Southern Ocean or lower Tasman Sea might affect some parts of the South Island – but again the chance is around 30% this far out.  At the moment the data suggests the high may win out, especially for the North Island. “The forecast for Christmas Day will become more locked in over the coming week”.

WeatherWatch.co.nz receives huge interest from not only our readers but from news reporters across the country as early as late November wanting a Christmas Day forecast.  We look at the general weather pattern likely around then and draw from that – but don’t issue a specifc forecast until about 10 days out.

This is simply a heads up for those who are interested – but remember, it’s still a long way out.  By this weekend we expect to be fairly confident about the general forecast up until Dec 24th – so watch for our next update!

Please Canterbury stay fine and keep those mountain tops warm. Don’t want cold winds on Christmas Day, or pestiferous SE anticyclonic ones either. Aside from that, anything at all will be fine.

Thanks for the heads up guys.

Hopefully the high wins the day, it will be interesting to see what actually develops.

I wish to thank you guys for the great work this year & wish you well for the New Year.

Philip, the recent pattern of approaching highs in the Tasman being stalled out by weak sub-antarctic fronts sweeping up to the centre of the country seems set to continue for a few weeks at least.

With the ENSO still continuing strongly neutral but with a slight swing toward El Nino for now, conditions are unsurprisingly El Nino like in that when the highs do arrive their centres are more to the north with moderate westerlies flowing across central and southern parts. Temperatures on the western side of the divide have dropped accordingly along with sunshine totals.

If this La Nada follows similar patterns to those seen here in the past expect to see/feel a change to an even more drier scenario from around Boxing Day onwards in the Lower N.I. west coast. The current total rainfall total for Palmerston North puts 2013 in 3rd place on the driest years list and it will take another 31.2mm to move down to 4th place. December’s long term mean is around 93mm and the city is currently at 31.4mm with little sign of significant rain in the next week, but there is still time to be hit by a the odd thunderstorm or two as happened between Christmas & New Years last year!

Rainfall in 2013 for much of the North Island has fluctuated greatly from month to month. Phil described the weather pattern to be chaotic for much of cycle of 2013.  This has brought us some very contrasting weather patterns. Reflecting back over the last three years (2011, 2012 and 2013) each one of them has been very different to the other.

2011 gave us an abnormal war Autumn and Winter but with a prolonged spring pattern that went right through into the depths of summer.

2013 had long hot dry summer, then a sudden plunge into winter for day in late May – but never really got much colder than this, then an early arrival of spring?

Will this chaotic weather pattern continue into next year? I can’t recall 2008, 2009 or 2010 as changeable as the most recent three years…?