Christmas Day: Sunny for some, showers for others 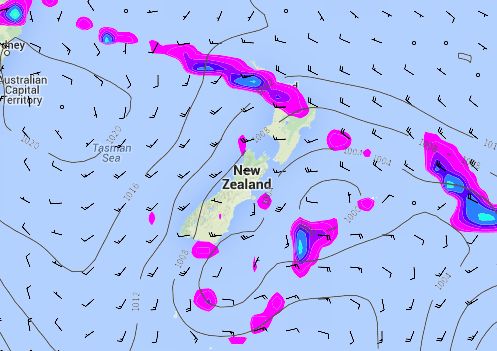 The forecast for Christmas Day is starting to become clearer and it looks as though a fairly weak low will push over southern New Zealand on Dec 24/25 firing up a front into western areas of the North Island on Christmas Day.

Long range computer models have done a good job at determining we’ll have a low pressure system in the mix – but a high moving in too.

It looks as though the low will send up a typical front across New Zealand on Christmas Eve – bringing heavy rain to the West Coast of the South Island.

Brisk westerlies are likely on Christmas Eve through central NZ as this system works north – that will help boost temperatures further north along eastern areas.  Meanwhile a high will remain just north of New Zealand bringing calmer, drier, conditions to the top half of the country.  But as the day goes on that high will slide further northwards – allowing this front to move into the North Island for Christmas Day.

But as the front runs into the northern high the rain maker will mostly fall apart – and this is the main reason why we can’t lock in a more precise forecast in advance this year, as there is quite a bit of change going on with the weather on that specific day.

Generally speaking most of New Zealand still doesn’t look overly wet – but it’s becoming clear that some regions will be in for a partially wet day on Dec 25 with a south to south west change moving north.

Highest risk areas for showers will be the western side of the North Island and eastern side of the South Island – but because this low is quite weak it means the rain aspect to this forecast will be tweaked in the coming days – but the chance of showers is certainly in the moderate risk, creeping towards higher risk for some in the west especially.

– Image / 1pm on Christmas Day shows a weak front over the western side of the North Island bringing some patchy rain or showers  The front will likely weaken as the day progresses.  Large parts of NZ should also have dry to mostly dry weather – we’ll be able to lock this in with more details over the weekend.  Image / Weathermap – see our Maps tab for the latest.