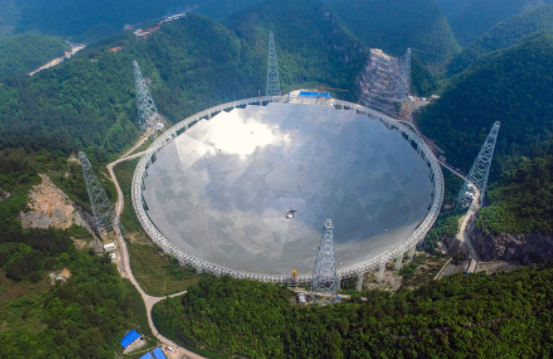 The search for alien life just got bigger. A lot bigger.

The world’s largest telescope will be completed this week in China and it has scientists very, very excited.
With a whopping 1,640 feet (500 meter) wide dish the size of 30 football fields, the telescope will able to detect radio signals — and potentially signs of life — from distant planets.
“China’s latest telescope will be able to look faster and further than past searches for extraterrestrial intelligence,” says Douglas Vakoch, president of METI International, an organization dedicated to detecting alien intelligence.
Cradled in a karst hollow in the mountainous landscape of southwest China, the Five-hundred-meter Aperture Spherical Telescope, or FAST, starts operation September 25.
It’s a process known by astronomers as “first light” — when a telescope opens its eyes and takes its first pictures of the universe.
And FAST is wide eyed: its field of vision is almost twice as big as the Arecibo telescope in Puerto Rico that has been the world’s biggest single aperture telescope for the past 53 years.
Russia’s RATAN-600 telescope is larger than FAST by diameter with panels arranged in a 576 meter wide ring — but it’s not one single dish and its collection area is much smaller than FAST and Arecibo.