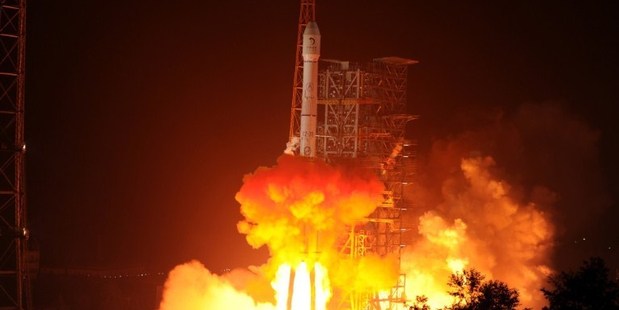 China has launched its first moon rover mission, state TV showed, the latest step in an ambitious space programme seen as a symbol of its rising global stature.

The Chang’e-3 rocket carrying the Jade Rabbit rover blasted off around 1:30am (local time), the CCTV official broadcaster showed in live footage from the Xichang Satellite Launch Centre in the country’s southwest.

As it shot into the dark sky, mission observers could be heard reporting at regular intervals that things were proceeding “normally”.

Within an hour the director of the launch centre Zhang Zhenzhong appeared before staff and declared the mission a “success”, CCTV showed.

The probe is due to land on the moon in mid-December to explore its surface and look for natural resources. It is the world’s third lunar rover mission following the United States and former Soviet Union decades earlier.

Chief probe designer Sun Zezhou hailed the mission as having “great scientific and economic significance”, according to the Xinhua state news agency.

“The mission has contributed to the development of a number of space technologies and some of them can be applied in civilian sector,” it paraphrased Sun as saying.

China sees its space programme as a symbol of its growing international status and technological advancement, as well as of the Communist Party’s success in reversing the fortunes of the once impoverished nation.

It aims to establish a permanent space station by 2020 and eventually send someone to the moon.

Since 2003 it has sent 10 astronauts into space and launched an orbiting space module, Tiangong-1. It also sent probes to orbit the moon in 2007 and 2010.

The first of those intentionally crashed into the moon’s surface at the end of its mission.

Data it collected was used to create in 2008 what Xinhua called “the most complete lunar hologram to date”.

The second probe was sent to “verify key technology”, orbit the moon and take pictures of the landing site in preparation for Chang’e-3, Xinhua said.

After completing that task it was sent into deep space to monitor an astroid.

“The Chinese are making rapid advances in spaceflight,” he said. “They’re going to get a lot of prestige out of this mission.”

The moon remains “largely unexplored”, Jones added, so “I expect that the Chinese rover will probably throw a few surprises our way scientifically”.

The rover’s name Jade Rabbit, or “Yutu”, was chosen in an online poll of 3.4 million voters.

It comes from an ancient Chinese myth about a rabbit living on the moon as the pet of Chang’e, a lunar goddess who swallowed an immortality pill.

The vehicle can climb slopes of up to 30 degrees and travel at 200 metres per hour, according to its designer, the Shanghai Aerospace Systems Engineering Research Institute.

Unlike earlier American and Soviet versions, the Chang’e-3 could “accurately survey landforms at the landing site and identify the safest spots on which to land”, Xinhua has said.

These included optical navigation systems which could provide pictures to warn of unsafe landing spots, whereas American and Soviet rovers could only rely on radar to gauge their distance from the ground, he said.

The mission had generated anticipation in recent days, with users of Sina Weibo, China’s version of Twitter, vowing to stay up to watch the live coverage.

“The news on TV about Chang’e 3 has made me incredibly proud,” one commenter said ahead of the launch.