After the thousands of dead pigs, come the tons of poisoned fish.

The Fuhe River is the scene of the latest disturbing example of river pollution in China.

Authorities cleared about 110 tons of dead fish from a 40-kilometer section of the river in the central province of Hubei, the state-run news agency Xinhua reported Wednesday.

Images taken at the scene this week showed thousands of silvery fish carcasses blanketing large expanses of the river and its shore.

The cause of the deaths, provincial environmental officials said, was the discharge of high levels of ammonia into the water by a local chemical plant in Yingcheng, outside the city of Wuhan. 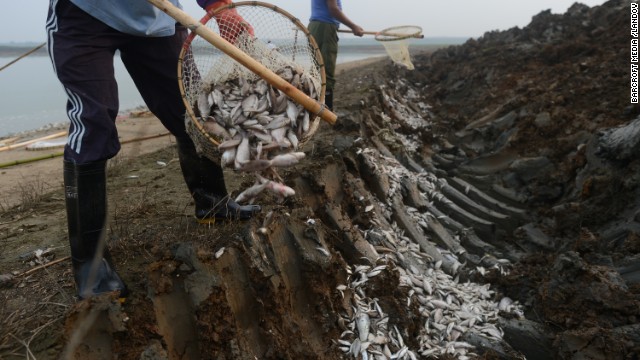 Samples taken at a water outlet from the plant on Tuesday indicated that ammonia density reached 196 milligrams per liter, a level “far in excess of the national standard,” Xinhua reported, citing the provincial environmental protection department.

The Hubei environmental authorities ordered the company that runs the plant, Hubei Shuanghuan Science and Technology Stock Co., to suspend operations at the plant and sort out its pollution controls, Xinhua said.

CNN made repeated calls for comment Thursday, but the company’s office line was busy. Its stock was suspended from trading on the Shenzhen stock exchange Wednesday.

In an update Thursday, the environmental protection department said that a recent drought in the area had “caused (a) significant drop in water level, which decreased the river’s capacity to hold pollutants.”

Domestic sewage mixed with untreated waste from the chemical plant and a paper mill “have caused the biological crisis” in the river, the department said in a statement 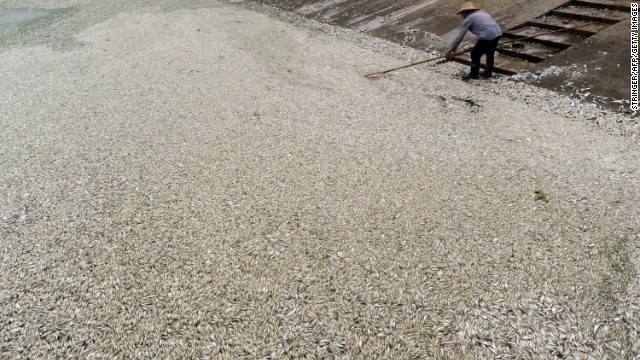 A villager who lives near the river, Li Songqing, told the local newspaper Chutian Metropolitan that the dead fish had been piling up since early Monday.

“Nearly all fish died out in this section, no matter if they were big or small,” he said.

Environmentalists said this added to other problems in the area.

“The environment of this region is already under extreme stress,” said Ma Tianjie, who manages Greenpeace’s campaign against toxic chemicals in East Asia. “The addition of these incidents will definitely worsen the situation.”

People on China’s Twitter-like microblog service, Weibo, reacted to the news with a mixture of anger and sarcasm.

“Why can’t we solve these problems and stop them from happening beforehand?” asked the user @Kanfangzu.

“The water quality must be fine, and this is just a mass suicide of the fish,” quipped another user, @Niyaobuyaolianguidouhaipa.

The poisoning of the fish is the most recent pollution scandal in China, which has many rivers and lakes with water quality problems.

In a 2009 report, the Ministry of Environmental Protection said pollution of surface water “remained serious.”

In the ministry’s most recent report, it said that about 30% of the rivers that it monitors are considered to be polluted.

Earlier this year, the discovery of thousands of bloated pig carcasses in a river near Shanghai caused widespread alarm.

At the time, officials blamed local pig farmers for dumping the dead animals in the river.

– CNN’s Dayu Zhang in Beijing contributed to this report.