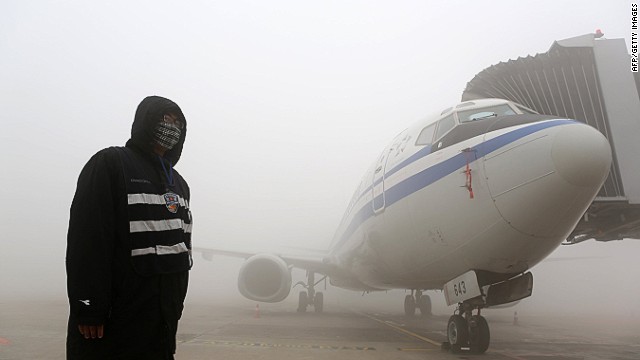 Smog in Beijing is now so bad and such a regular occurrence that the country’s civil aviation authority will require the pilots of even small commercial airlines to be able to perform “blind landings.”

The move is aimed at easing delays at Beijing Capital International Airport, which has had the worst flight delays out of 35 international airports.

According to China’s state-run China Daily, the Civil Aviation Administration of China (CAAC) will from January 1 require pilots flying from China’s 10 busiest airports to Beijing to be able to use instrument-landing system on hazy days with a visibility of 400 meters.

“It is part of a series of measures the administration took recently to raise flights’ on-time performance,” a CAAC source told the China Daily.

The latest bout of smog in Beijing and Shanghai has led to the cancellation or delay of hundreds of flights, stranding passengers and creating chaos at airports.

Chinese media reports said that while 80% of the pilots at Spring Airlines, half of China Eastern and most of Juneyao Airlines pilots had received training, only larger airports such as those in Shanghai, Guangzhou and Xian were equipped with ground systems that allowed for blind landings.

A pilot with Cathay Pacific, who did not want to be named because he was not authorized to speak, said that modern jetliners can be brought to land in zero visibility.

“The greatest limitation is really being able to taxi off the runway,” he told CNN, adding that modern aircraft had three systems on-board that could auto-land a plane.

He said training in these systems involved identifying deficiencies or failures in any of the systems and establishing at what point the pilots would have to abort a landing.

He added that the problems that smog and pollution created for aviation was not just isolated to China and that other countries had also struggled with the problem.

“The whole concept of auto-land was developed in England in the 1960s for the fog that London gets and on top of that all the pollution that they got at the time,” he said. “This is just the same technology moving into the industrial revolution that’s happening in China at the moment.”