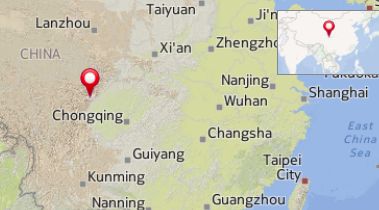 Updated 8:28am — A landslide the size of a small town has killed at least 18 people and toppled 11 buildings in southwest China, state-run media said, citing local authorities.

By Thursday afternoon, the number of people reported missing had climbed to 107, from 21 the previous day. Rescuers continue to dig through 53 million cubic feet of dirt in search of them.

The forecast calls for less rain, which should make the search easier.

Flooding that triggered the landslide has affected 1.5 million people and inundated tens of thousands of acres of crops. The torrents have plagued the mountainous region since Monday, smashing bridges and knocking out power to thousands.

They have washed away property worth more than $40 million, provincial officials said.

Zhang Jiuchun is an interior designer living in Mianyang, the second-largest city in Sichuan. He told CNN in a phone interview that flooding, landslides and mudslides have paralyzed highway and rail services in many parts of the province.

Zhang said suburban areas have been hit the hardest.

“I think it’s the worst since 1998,” Zhang said of the disaster, referring to major flooding sweeping across China over a decade ago.

Xinhua also reported that more than 400 stranded people have been securely moved out of Dujiangyan.

In January 46 died after a landslide in southwest China.

wow, that is a lot of buildings toppled and people buried. Nasty Mother Nature strikes agin!