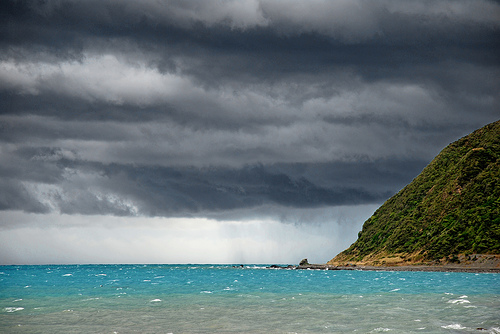 New Zealanders have just shivered through the coldest October in more than 25 years – not long after they enjoyed the warmest August on record, says a climate analyst.
After a winter of wild swings, temperatures are expected to be closer to normal in November, December and January.
The October mean temperature of 10.7C was 1.4C below average making it the coldest October since 1982, climate scientist Jim Salinger has calculated.
The heavy snow that trapped motorists and surprised Hawkes Bay farmers on October 4 and 5 was the latest spring snow of its kind to hit the North Island since 1951, he said.
Dr Salinger, a former Niwa scientist who now works as a climate expert for farmers’ pay channel Country 99 TV, said October was very wet in Gisborne and Hawkes Bay – with each recording twice the usual rainfall for the month – while the South Island’s West Coast got only half of its usual dose of rain.
Niwa’s climate outlook for the next three months is for normal temperatures for the North Island and Nelson/Marlborough, and average or below average temperatures for the rest of the South Island.
The summary said an El Nino in the equatorial Pacific was expected to stay there throughout the summer but would have little impact on New Zealand.
Most of the country should get the normal amount of rain for the season, but the north and east of the North Island may get a little less than usual.
Its winter summary noted that the season was one of extreme temperature swings.
The topsy-turvy weather began in May, which was the coldest recorded in many parts of New Zealand, with temperatures more like the beginning of winter than the end of autumn.
June was also colder than normal before temperatures returned closer to normal in July.

Then came August – the warmest New Zealand has seen since temperatures were first recorded 155 years ago – with an average temperature almost 2C warmer than usual at a spring-like 10.4C.

October 1982 was followed by a mild November with plenty of NW winds,then December that year was so miserable wet and cold,followed by a windy showery January and February 1983.though in the east it was very warm if this is a trend.