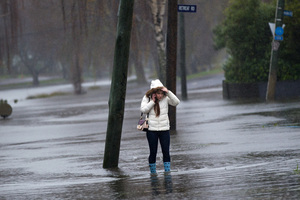 The first day of autumn brought a sudden cooling on Saturday, prompting Aucklanders to break out jackets and jumpers in readiness for more fresh southwesterly winds and lower temperatures.

On Auckland’s west coast, beachgoers braved a strong chilly wind and showers between bursts of sunshine.

“The whole weekend weather has been very changeable, because you have that cool wind and one minute you are cold and next it’s burning hot.

“There’s a definite autumnal tinge to the air with the cold and it’s down to about 12C at night after very hot days.”

At Auckland Airport yesterday’s peak daytime temperature was 22C, cooled by clouds and a 20km/h wind.

But on the sheltered side of the region, sunburn was the biggest worry for parents of the 500 who took part in the annual Children’s Day at Browns Bay Village Green.

East Coast Bays community co-ordinator Sally Cargill said the slippery water slides were a favourite when kids were let loose to chase bubbles and play with lots of toys.

Auckland and the rest of the upper North Island should expect more temperatures in the low 20s with fresh southwesterly breezes during the week.

The wind was just “a taste of autumn” compared with a gale-force southerly expected in Gisborne, Hawkes Bay and the Wairarapa.

Southerly gales would lash Otago and Canterbury, spreading north up the east coast before easing on Wednesday morning.

The government has also issued a snow warning above 800m on Milford Rd in Central Otago.