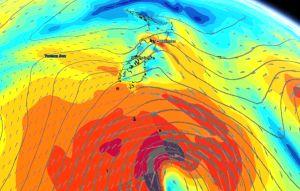 UPDATED 7:23pm — A cold change is this evening pouncing on the lower South Island – and is now headed towards the rest of New Zealand.

As hot nor’westers blow across Canterbury the temperature in Invercargill has dropped to just 8 degrees this hour, down from 20 degrees earlier today.

Gore and Lumsden share just 7 degrees as of 7pm.

The cold change is beginning to move into South Canterbury after reaching Dunedin late this afternoon/early evening.  At 7pm Dunedin had just 9 degrees while much of Canterbury has 21.

Ahead of the cold change is a hot nor’wester – the North Island hit 30 degrees officially today in Napier and Hastings while Christchurch reached 29 under similar summer conditions.

Those strong winds have slammed Wellington today with gale force winds reaching 120km/h in the city itself.

Friday will be a very different story in Christchurch, with the temperature expected to only reach 17 degrees at its hottest – but skies clearing to a mostly sunny day.

Despite the brief cold snap most places should feel summer warmth again over the weekend predicts WeatherWatch.co.nz – but dress up warm if you’re heading out on Saturday night, with temperatures dipping to single digits or low double digits in a number of places.

How cold  is it where you are?  Or is it hot and windy?  Post your observations below!

Heads up Auckland city, vicious and abrupt SW wind change heading your way
with a sudden temperature drop as well

Driving home from work tonight at 9pm from Arrowtown to Frankton and acccording to my cars temp gauge it varied outside from 5 to 3 degrees C!

Cool and wet with a light northerly in Invers but the ground is loving it. Still don’t need any heating on indoors.

Warm and VERY windy here in Whitby Wellington.
Got to love this “Summer” being so changeable.
I wonder if we will get the usual settling of weather this February March and April, if not it could be a year of weather extreme extremes.

WW a question. Does the tropical line look to be getting further south today?
Looks to be spread more across the East of Aussie to North of the North Island.

Hello! Its cloudy and the wind is slowly dying down in Christchurch, was very hot this morning!