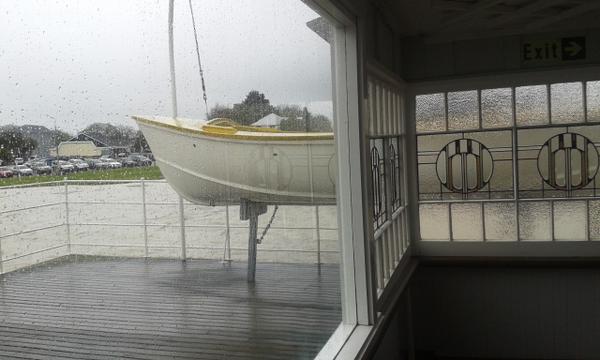 The bad weather has hit hardest in the Gisborne region, where a man had to escape from his car when it became overcome by floodwater in Rototahi, south of Tolaga Bay.

Gisborne Civil Defence said at 11am that over half a metre of floodwater was covering State Highway 2 at the Graham Rd turnoff to Te Karaka, where the evacuation of homes was being considered.

Sand-bagging was in progress for one Graham Rd resident in Kaiti.

NZTA has closed SH2 between Te Karaka and Gisborne because of flooding, cutting off the township.

The Gisborne region has experienced significant rainfall in the past 24 hours, with 146mm falling in Pakarae and 140mm measured in Whatatutu.

The Hikuwai River was rising by a metre an hour this morning, but was stable north of Tolaga Bay at 8m and may have peaked. The Waimata River gauge at Goodwins reached 8.8m by mid-morning.

Here is the big as slip going to Aotea-the road is shut-Oto DC hope to open the road by lunch today #DriveLikeANana pic.twitter.com/fmJtBztGby

SH35 is flooded between Tolaga Bay and Tokomaru Bay and the New Zealand Transport Agency has issued a warning for flooding at Okitu.

The highway remains open between Waihau Bay and Tauwhareparae Rd in Tolaga Bay, but NZTA warned motorists to drive with caution due to multiple slips between Opotiki and Te Araroa.

Tolaga Bay Area School and Te Karaka High School are closed and Gisborne Civil Defence spokeswoman Sheridan Gundry said there was surface flooding across the district and a number of trees were down on roads.

Emergency services are checking roads and keeping a close eye on rising rivers.

The council said manholes had over-topped in Gisborne and sewage valves have been opened to relieve pressure and prevent sewage flowing into properties.

Water has been seen lapping boats near the Anzac Park boat shed.

In Waikato, a slip has blocked the road to Aotea in the Otorohanga district this morning.

Waikato Civil Defence shared a photo of the slip on Twitter and said Otorohanga District Council hoped to clear the road before lunchtime.

“Most of the rain is falling up in the hills [of the Gisborne and Hawkes Bay regions] and we have a whole bunch of stations recording well over 150mm [in the last 24 hours].”

Two stations in the hills around northern Hawkes Bay had recorded over 170mm, Mr Adams said.

“Gisborne Airport has recorded 99mm in the last 24 hours, and to give that some context their monthly average for September is 66mm.”

Mr Adams said the rain was expected to continue to fall heavily until tonight, including some localised bursts of heavy rain and hail in the region.

Tonight the rain band will be tracking south, and MetService has issued heavy rain watches for Wairarapa and Marlborough.

The heavy rain would make its way south to Canterbury and Otago on Wednesday.

“There is some good news amongst that, a lot of those areas really need that rain. So while there is annoyance for commuters in the main centres there is relief for farmers,” Mr Adams said.

The river is up, a perfect morning to imagine I’m a captain – surveying the Taruheru from #thestarofcanada #gisborne pic.twitter.com/N2eQx4BwmR

One flight from Gisborne Airport has been cancelled because of the rain. The flight to Wellington had been scheduled to depart at 12.30pm.

NZTA has warned Wellington motorists, pedestrians and cyclists to keep their wits about them and take extra care as the weather battering Gisborne and Hawkes Bay moves into the region.

The weather was reported to have contributed to a number of crashes this morning, so motorists were advised to take extra care on their trip home this evening.

“Bad weather makes the roads more dangerous. Heavy rain makes our roads more greasy, and reduces visibility – this adds up to a greater risk of crashes.

“To adjust for the weather, it’s important to drop your speeds, increase your following distances, and drive to the conditions.”

Mr Owen said it was not only drivers who make errors in wet weather.

“When it’s hosing down, pedestrians sometimes make rash decisions when crossing the road. Raincoat hoods can also impede visibility, and we’re asking motorists to keep their eyes peeled for pedestrians and expect the unexpected.”

Mr Owen said motorists should also be on the lookout for surface flooding, slips and debris brought down by the rainfall.

Travel on the Rimutaka Hill Road, SH2, or on the Kapiti Coast will be difficult for high sided vehicles like caravans, trucks and campervans as well as for motorbikes due to high winds.

MetService has warned up to 10mm of rain is forecast for this evening in Wellington with more coming overnight.Southerly gales may become severe in exposed places of Wellington and the Kapiti Coast until tomorrow morning.

A storm warning is in place for the Cook Straight with southerlies expected to reach 100km/h and a 4 m swell.