Chaos in UN climate talks as countries walk out of meetings 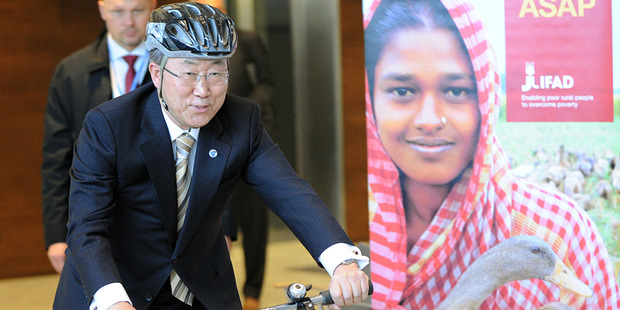 An old rift between rich and poor has reopened in UN climate talks as developing countries look for ways to make developed countries accept responsibility for global warming – and pay for it.

With two days left, there was commotion in the Warsaw talks after the conference president – Poland’s environment minister – was fired in a government reshuffle and developing country negotiators said they walked out of a late-night meeting on compensation for climate impacts.

“We do not see a clear commitment of developed parties to reach an agreement,” said Rene Orellana, head of Bolivia’s delegation.

US climate envoy Todd Stern downplayed the dispute and said American negotiators who had attended the meeting were surprised to hear of a walk-out.

“The meeting ended with everyone leaving,” Stern told reporters in Warsaw.

Differing views on what’s been said and done in closed discussions is not unusual in the slow-moving UN effort to curb global warming, which has often been held back by mistrust between rich and poor countries.

The question of who is to blame for global warming is central to developing countries who say they should receive financial support from rich nations to green their economies, adapt to shifts in the climate and cover costs of unavoidable damage caused by warming temperatures.

Also, they say the fact that rich nations, historically speaking, have released the biggest amounts of CO2 and other heat-trapping gases, means they need to take the lead in reducing current emissions.

In Warsaw, Brazil even proposed developing a formula to calculate historical blame, to guide talks on a new global climate deal in 2015.

“They must know how much they are actually responsible … for the essential problem of climate change,” Brazilian negotiator Raphael Azeredo said.

Developed nations blocked that proposal, saying you must also look at current and future emissions when dividing the responsibility.

China overtook the US to become the world’s biggest carbon polluter last decade, and developing countries as a whole now have higher emissions than the developed world.

To focus only on past emissions “seems to us as very partial and not very accurate,” Stern, the US envoy, said earlier this week.

The 2015 deal is supposed to establish what climate actions countries will take after 2020. The Warsaw conference is supposed to lay the foundation for that agreement but it was unclear Wednesday whether countries would be able to agree on basic stepping stones including a timeline for when commitments should be presented.

The government of Poland, which has been criticized at the talks for hosting a coal summit at the same time, stirred things up further Wednesday by replacing Environment Minister Marcin Korolec, who is presiding over the climate conference.
Korolec told reporters the move would not affect his duties as conference president.

It’s like deciding there’s a pink elephant on the ceiling and threatening to walk out unless the fire brigade rescues it.

Geesh. Forget the blame mentality and concentrate on a mitigation policy … for the sake of future generations.