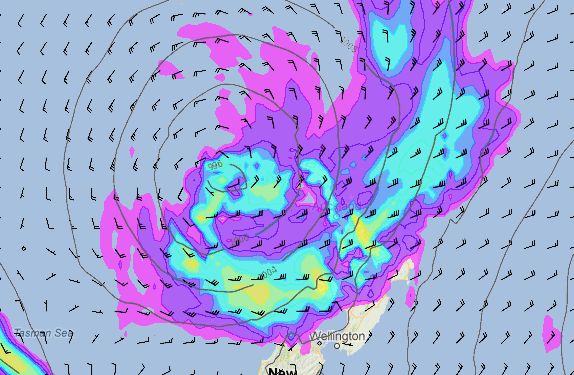 The first significant low of 2013 continues to push rain and gusty winds across the upper North Island.   Rain is patchy and light for many areas but heavier downpours are popping up across the island.  In Auckland rain has been falling since Monday afternoon – the longest stretch of rain so far this year for the city.

Blustery north to north east winds are affecting parts of the North Island with gusts in Auckland expected to reach 80km/h in exposed places.

The wind could also add to autumn leaves in drains.  WeatherWatch.co.nz head weather analyst Philip Duncan says flooding is a possibility.  “With debris coming from trees, like autumn leafs, we may see drains and gutters blocking up and that could lead to surface flooding”.

The centre of the low is expected to make landfall somewhere around Taranaki tonight, bringing more rain and gusty winds – although lighter winds in the centre of the low.  As the low moves into the western North Island overnight it will push heavy rain in to the South Island.”

“There’s very little doubt in my mind that a number of droughts are coming to an end and the good news is we are expecting some decent downpours along the eastern coastline too”.

The low has tracked a little closer to Auckland and the upper North Island overnight – gusty winds are expected to ease today as the centre of the low drifts further south.

The centre of the sub-tropical low will cross Taranaki overnight and then down over Wellington on Wednesday morning before quickly zipping away from New Zealand on Thursday.

By Friday a small but intense Tasman Sea low will form hot on its heels – it will then merge with another low in and could linger for an entire week in the Tasman Sea based on some computer models.

very calm and dry here in Whitby at present. Hoping for a good dose of rain to water the garden. Thanks guys for the updates.