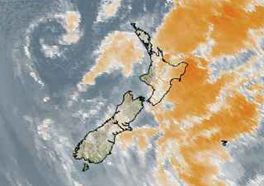 The centre of the low responsible for thick cloud in some areas and heavy showers and thunderstorms in others will cross New Zealand tonight after delivering further rough weather.

WeatherWatch.co.nz says heavy showers are clearly visible on the latest satellite maps pushing into northern and western regions of both islands.

The Lightning Tracker at WeatherWatch.co.nz has been kept busy overnight detecting 2500 strikes already in the first seven hours of Saturday – over 15,000 were recorded across Friday.

In the past hour 250 strikes have been record either over or near the North Island – mainly northern and western facing regions.

As the low moves closer to central New Zealand today showers will become heavier with squallier with WeatherWatch.co.nz predicting Taranaki, Wanganui, Manawatu and Horowhenua being most exposed to the heavy, squally, downpours and possible thunderstorms as the day progresses while northern New Zealand – such as Northland, Auckland, Waikato, Coromandel and Bay of Plenty – are also at a risk of thundery showers today, especially this morning.