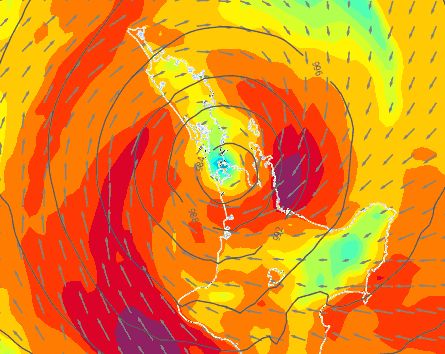 The centre of the sub-tropical low responsible for power cuts, felling trees and flooding has finally reached the northern Auckland region bang on time says WeatherWatch.co.nz.

Winds ease for some in Auckland, pick up for others

Head weather analyst Philip Duncan says with the low now moving in it means the winds will pick up even more for some suburbs, while others will see winds finally take a step back. “Gales at Auckland Airport have eased in the past hour while gales have developed through other central suburbs. The centre of the low has started to move in to northern areas and the air pressure has stopped falling for some”.

As of 11:30pm the air pressure was rising for some areas but still falling in many other parts of Auckland city itself.

Winds were increasing in some populated central areas. This wind increase was due to the wind direction change, which was predicted to happen shortly before midnight. This is another sign the centre of the low has started to finally push in across the region. “We had gale southerlies in the south now we have gale easterlies in the central part of Auckland. By midnight we expect some suburbs to be calmer but as the low moves through the winds will change, easing conditions for some but rising winds for others”.

Mr Duncan says the low is now starting to change shape as it moves in. “The centre of the low certainly won’t perfectly track over all of Auckland – some will have a blustery night while others will find the winds do ease. We can’t get more specific because it will continue to change and shift over the next several hours as the low tracks across the region and winds swing from southerlies, to easterlies to westerlies”.

North of Auckland gales caused damage in Whangarei earlier this evening as the centre of the low brushed the city, winds have eased there now.

More damage: While winds are below severe levels for the most part in Auckland City the gusts are powerful enough to be dangerous. We expect more isolated cases of powercuts and trees down while the centre of the low moves through. The air pressure is expected to stop falling across most of Auckland over the next hour.

The low on Wednesday

Tomorrow morning westerlies will start to build up but there should be a lull in the wind for a portion of the Auckland region at some point overnight.

By dawn the low is expected to be west of Auckland – as it continues its south west trek – and by noon be west of Hamilton, out at sea again.

However by Wednesday afternoon it backtracks across Waikato and Bay of Plenty bringing calmer weather to a big chunk of central parts of the North Island as the centre of the low dramatically increases in size as the whole system starts to fall apart. But that process on Wednesday will pull the strong to gale force westerlies in over Northland, upper half of Auckland and Coromandel Peninsula.

The easterly change tonight in Auckland is coupled with high tide and low air pressure. Coastal flooding is quite possible in low lying roads and other parts of Auckland. This risk also extends around Hauraki Gulf and Firth of Thames.

Meanwhile torrential rain north of Auckland City has now mostly eased – as has heavy rain in Northland and Coromandel Peninsula.

However humidity is now 100% in parts of Auckland meaning rain will develop at a moments notice. You’ll find if it’s not raining then drizzle will often pop up in this weather. Big parts of Auckland have had drier weather later this evening, mostly further south. Rain is expected to return to most places after midnight – and tomorrow will be wet too – but rainfall totals won’t be as high in Auckland as they were today, although heavy showers/areas of rain are expected. On top of the recent rain surface flooding and minor river flooding could still be an issue on Weds.

Rain could become heavy again overnight around Puhoi where flooding has already occured.

STRONG WINDS
We expect severe gales to continue along the western side of the Coromandel and eastern Waikato overnight but slowly easing after midnight. Damaging gusts are possible until dawn in some pockets along the ranges.

in Taranaki, Manawatu, Horowhenua and Kapiti – we expect the strongest winds to be between now and dawn/early Weds morning. It will be a similar story for Hawkes Bay, Wairarapa, Wellington, Marlborough and Nelson and gales may linger into the morning. Further power cuts are expected.

A strong southerly later tomorrow will also push into South Taranaki and Wanganui.

I know that this isn’t a Tropical Cyclone but with the timing and placement of this low over Auckland right now, perhaps we should name it, dare I say it, “Oracle?”

We are in West Harbour and the wind is definitely increasing. Has been for the last hour. Heard a loud metal noise about half an hour ago but no idea what it was, will have to wait until it’s light to check it out. Huge gusts! Windows and doors are rattling and upstairs is creaking. We are all settled downstairs where it is quieter in the hope we will get some sleep. These wild nights seem to be becoming reasonably frequent. Periodically checking updates and reading how others are faring…
Thanks WW you are brilliant!! You must walk around like zombies after your all nighters answering questions and keeping us up to date and so well informed.

It’s 12.04 and I’m out west auckland.. The wind is at it’s strongest right now.. It’s aggressive as and I can hear things banging and crashing outside from it getting blown around..

Gales (severe) peaking at Auckland Airport just prior to midnight with a gust of 47 knots, mean speed 32 knots. Thankfully the wind has backed northeast thus all but eliminating the crosswinds that had been created by the southeast direction that caused issues during the latter part of the afternoon and into the evening.

Thanks for the update – much appreciated.