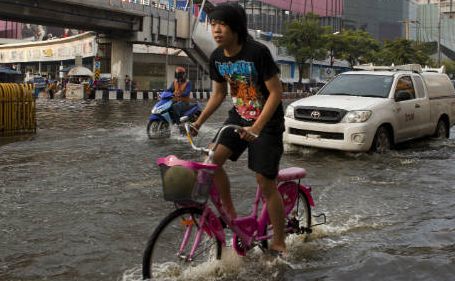 The worst flooding in generations crept deeper into Bangkok Friday as the Thai leader asked residents to come to terms with water everywhere.

Cars looked like boats driving on roads turned to rivers. People propped their feet up on coffee tables not for rest but just to keep dry as murky water entered homes.

The flooding has claimed 442 lives, the Interior Ministry said. Of Thailand’s 64 provinces, 25 have been affected.

Bangkok’s central business district is still dry but other parts of the bustling metropolis of 12 million people are inundated.

Prime Minister Yingluck Shinawatra told western Bangkok residents that the water was sure to linger and they must learn to cope, the MCOT news agency reported.

She said the real problem was western Bangkok, which has no infrastructure to handle the massive volumes of runoff from provinces farther north soaked by this year’s heavy monsoons.

The flooding has had an enormous business impact as many factories and offices have been under water for more than a month. That includes Hi Tech Industrial Park, where Canon and Sony own assembly plants.

Thanakit Photong, the site’s safety manager, said he expected to begin pumping water out next week.

Srisuda Khunnatham, an employee at the tech park, said she was frightened when she first saw the flooding.

“At first I was afraid that I might be laid off, but my company reassured us,” she said. “I didn’t expect it would be that bad.”