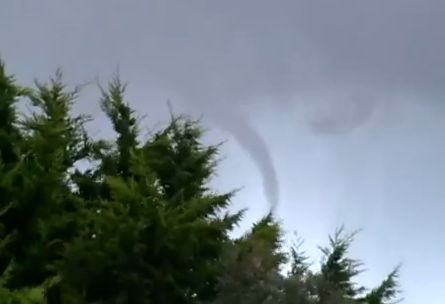 A hail shower in Porirua yesterday afternoon produced this strong funnel cloud – had it touched down it would’ve been a small scale tornado or waterspout.

Our thanks to Royal Wakefield for sending us the video:  “Noticed out the window some strange clouds, pulled out the camera and noticed the funnel cloud. Had it touched the ground it would have officially been a tornado. About 30 mins to 45 mins later it hailed a little”.

Good camera work Royal.
I remember looking at those clouds around 2pm yesterday as I walked the Labs in Whitby.
I thought they looked very black and bottom heavy and as the Southerly flow was obviously running into the Northerly airflow I thought we might be in for a good thunderstorm.