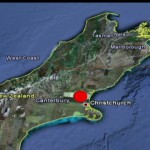 A 4.8 magnitude aftershock has been felt in Canterbury this afternoon.It was at a depth of nine kilometres and centred 10 kilometres northeast of Christchurch.

Pete, who lives in Christchurch, says it was a short, sharp jolt.
He feels he and his family are constantly living on edge, waiting for the next one.
Pete says it has caused more cracks in the side of his house.

Power was out for around 15 minutes but is understood to be back on.The only other aftershock recorded today measured 3.7, and that was felt at 1.02 this afternoon.It was at a depth of 11 kilometres, and centred 20 kilometres southwest of Christchurch.

I notice geonet has a “felt it button” for people to use now.
http://www.geonet.org.nz/earthquake/quakes/recent_quakes.html

…well, all the neighbours around here reckon it felt more like a 5.4 – 6.0…which would make it close to the second biggest aftershock since 4 September….

…it was strong enough to cut our power off for around 20 mins ( that is the second time, only that we have lost power )…and enough for me to dash straight outside without a moments hesitation, as I half expected the house to collapse! 8 – [

It obviously was a sizeable one in your area!

I’m near the epicentre of the main quake out by Kirwee and we felt very little and it was similar last Tuesday when the 5.02 hit the city.

Let’s hope for a quieter night 🙂

That’s one thing about these late aftershocks. They do tend to feel severe in the area they occur to about 5 to 10kms, then the feel of them do taper out, further than that.
The big one last Tuesday at 11.32am was felt violently where I was but at home here, it was just a bit of a rumble and a slight short shudder, just like today’s, here.
Felt more severe shakes here than that one and they have NOT come up on Geonet, strangely.

It makes one wonder is there 10km or abouts of generally “liquidated material” under Christchurch,why would it go on so long and soon it surely must compact thus meaning settling down.Not sure how far the bedrock is.