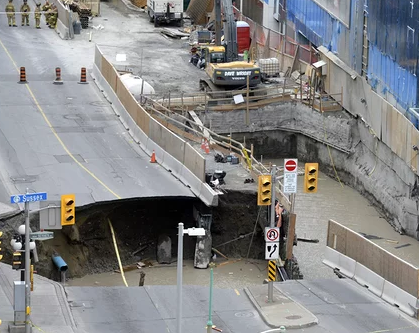 A sinkhole spanning the length of a four-lane road has opened in downtown Ottawa, swallowing a van, causing a gas leak and forcing the evacuation of several buildings in the heart of Canada’s capital.

The large sinkhole formed on Wednesday a few blocks away from parliament, in an area that was under construction and had been closed to all traffic save buses and taxis. There were no immediate reports of injuries.

Many on social media reported a “foul” smell of gas hanging over the area, prompting the hurried evacuation of a nearby shopping centre as well as a hotel and convention centre. Firefighters went door to door evacuating other businesses that sit along the busy stretch of road.

The gaping hole first appeared midmorning on Wednesday, with estimates putting it as large as five metres in diameter. Video taken from the scene showed dirty brown water gushing into a deep break in the paved road.

The sinkhole quickly grew to stretch from sidewalk to sidewalk of the four-lane road. As it widened, a parked dark van and a street lamp tumbled into the sinkhole.

The exact size of the sinkhole was being determined by engineers, who had been initially kept at bay by a ruptured watermain and gas line, city officials said on Wednesday

There was little indication of how long it would take to repair the damage, said Ottawa’s mayor, Jim Watson. “It’s a significant sinkhole in the downtown core. It has a major impact on our largest retail shopping centre, one of our major hotels as well as one of busiest intersections and bus routes.”

Speculation was rife that the cavernous hole in the pavement was linked to a 2.5km underground tunnel being dug for the city’s light rail transit system. Workers had been excavating in the area when the sinkhole began to form. All of them had made it out safely.

In 2014, digging associated with the light rail transit system was linked to an eight-metre wide sinkhole that appeared just a few blocks over from the site of Wednesday’s sinkhole.