Canada floods: 4 missing in Quebec and BC 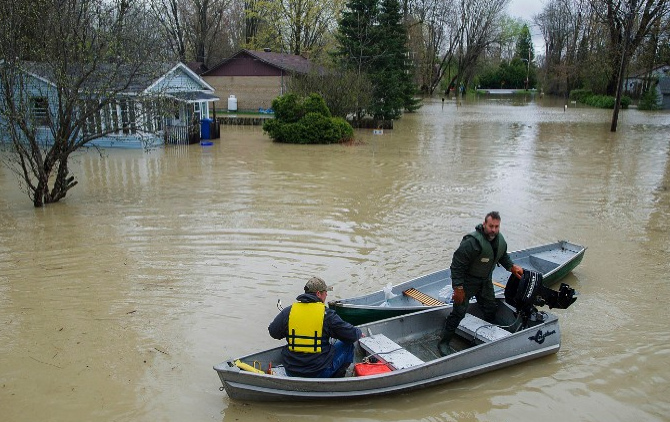 “This is the heaviest rainfall we have seen in over 50 years,” Public Safety Canada spokesman Dan Brien said.
As a man was driving with his 2-year-old son in the GaspÃ©sie area of Quebec, powerful flood waters pushed their vehicle off the road, said Scott Bardsley, the spokesman for the Public Safety and Emergency Preparedness Ministry.
“They got on the roof of the car but were swept away,” Brien said.
In British Columbia, the Royal Canadian Mounted Police said a local fire chief went missing after a swollen river swept him away in Cash Creek, B.C. An elderly man is also missing after a mudslide enveloped his home in Tappen, B.C.
There are 1,520 evacuees in the province of Quebec, Public Safety and Emergency Preparedness Minister Ralph Goodale said.
Canadian Armed Forces deployed 1,200 personnel over the past weekend, and an additional 300 personnel are on their way, he said. Some additional 150 support personnel will back up the troops.

Montreal’s mayor has declared a state of emergency as rising flood waters threaten dikes and breakwaters and force residents from their homes in parts of Canada’s Quebec province.
In a statement on Sunday announcing the 48-hour state of emergency, the city of Montreal said forecasts suggested that the situation would not be short-lived.
Environment Canada was warning that water levels in the RiviÃ¨re des Prairies were expected to rise by 20 centimeters overnight, weakening dikes, breakwaters and dams set up in key areas to prevent water infiltration, the statement said.
At least 180 homes had been evacuated, the city said, and the Red Cross was providing shelter to those residents forced out.

Canadian troops fill sandbags in the Montreal borough of Pierrefonds, Sunday.
“Montreal is in the middle of an exceptional and historic circumstance owing to an unprecedented rise in water levels causing flooding. The safety of residents remains our biggest priority, and that’s why I declared the state of emergency,” Montreal Mayor Denis Coderre said.
“I ask all residents affected by the flooding to collaborate by following the recommendations and abiding by the decisions made now and as we move forward. Istrongly urge residents of ÃŽle Mercier and other residents whose safety cannot be ensured by emergency services to comply with the evacuation order,” he said.
The state of emergency applies to the areas of Ahuntsic–Cartierville; ÃŽle-Bizard–Sainte-GeneviÃ¨ve; Pierrefonds-Roxboro; Sainte-Anne-de-Bellevue; and Senneville.