Can La Nina save the world & NZ from record hot temperatures? 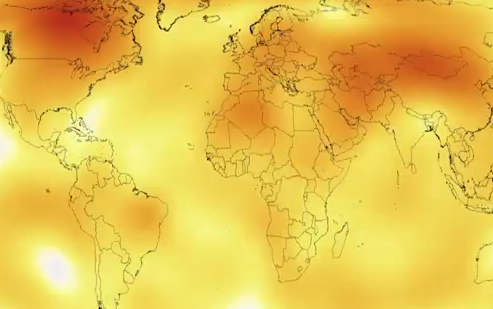 What would a La Nina summer or autumn be like for New Zealand? Or the globe?  We have the potential set up along with a report from CNN…

July was the world’s hottest month ever, according to NASA, the tenth month in a row to break temperature records globally.

But help may be on the way in the form of a developing La Nina weather pattern — it just may not arrive until 2017.
Yesterday, NASA confirmed in a statement 2016 had seen the warmest July ever, with air and sea surface temperatures almost a full degree above average, compared to measurements between 1951 and 1980.
Since October 2015, every month has set a new global record for hottest temperatures.
It coincides with an unusually strong El Nino Pattern which caused severe heat and drought across Southeast Asia, as well as raising temperatures globally.
“It appears almost a certainty that 2016 also will be the warmest year on record,” NASA’s Goddard Institute for Space Studies director Gavin Schmidt said in a statement.
Agus Santoso, senior research associate at the University of New South Wales’ Climate Change Research Centre, said a weak La Nina appeared to be developing and could begin to affect temperatures from early 2017.
“Countries on the Eastern Pacific will be cooler and the Western Pacific will be warmer and wetter, so over South America, even California, it’s going to be slightly drier and cooler … on the other side of the Pacific, Indonesia, Malaysia, it’s going to get more moisture, more precipitation and warmer air,” he said.
According to the Climate Prediction Center, the conditions indicated a La Nina was most likely to arrive during fall and winter in the northern hemisphere.
What would the effects of La Nina be globally?
The surge in global temperatures, driven by climate change and a strong El Nino, could begin to slow under a La Nina pattern, Santoso said, but not completely and not until next year.
“When we have an El Nino it’s going to rise (and) if it’s La Nina the rise will be weaker … but given the background warming has been accelerating we will still see an increase in temperature but it won’t be as rapid as what we’re seeing in 2015,” he said.
“Next year I would expect the rise to be subdued, but still rising.” 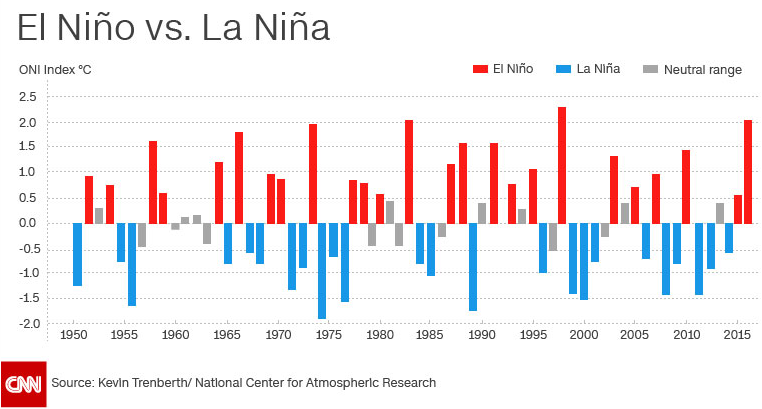 What would La Nina mean for New Zealand?

Typically La Nina warms up the ocean around New Zealand and this encourages more lows and tropical storms to our north, north east and west. So a La Nina summer or Autumn might see an increase in sub-tropical and Tasman lows/storms, cloud, humidity, rain and easterlies for many regions in the North Island.
If that reaches down to Canterbury – great news for farmers. But a La Nina summer can bring higher humidity over summer which makes for muggy nights and a higher chance of downpours for campers. Some farmers and growers also don’t like forecasts with higher humidity or rain.
If you want sun and heat then many western areas can also dry out and have spectacular summer – think of it as a reverse Canterbury nor’wester for most of our western coastline.  Eastern areas and many of our main centres can have cloudier cooler summers at the beach (but perhaps warmer nights).
Of course, the recent El Nino was forecast to be severe for New Zealand by authorities but in the end it really wasn’t for the entire country. New Zealand is mainly made up of two small mountainous islands surrounded by ocean and smack bang in the roaring forties – in other words, anything can happen and we can sometimes buck the global weather trend in some areas. One single high or low can dwarf and affect our entire nation for a week at a time occasionally, which can sometimes produce weather not so expected in an La Nina or El Nino event and therefore change how we are affected overall.
– WeatherWatch.co.nz

The way the weather is going at present, it is stacking up for yet another hot spring-summer drought. Struth. There are far too many highs still and no real low pressure. I follow BOM as they are the only forecaster in the Southern Hemisphere to keep us updated regularly with the state of ENSO and they don’t charge $$$ for that information. Northern Hemisphere updates are very useful as well. I can’t believe how very 3rd world and backwards science is in New Zealand, when we have to rely on other countries to give us regular climate updates. Good work Phil, for plugging the gaps, and keep any ENSO news coming, as it is very relevant. Whatever happens, I hope we don’t get a Spring of dry or non-existent gales. We’ve been stuck in this pattern since 2012 now. Where I live La Nina normally means negative flow: persistent SW-NW gales and rain (like Akld is at present). Re BOM, looking like if it does arrive, La Nina will be a weak one.