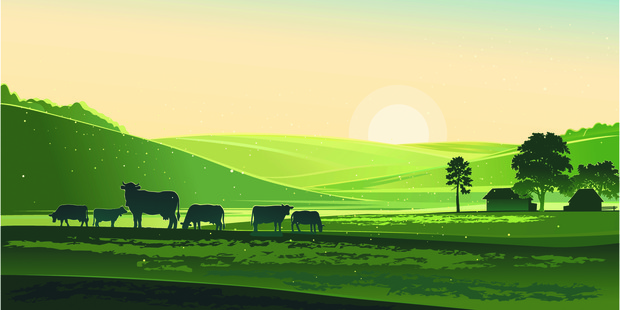 The following is an article from the NZ Herald’s Nigel Parry.

Climate change can have significant effects on farming and food production.

The boot should be on the other foot, according to Professor Steve Wratten of the Bio-Protection Research Centre at Lincoln University. Farmers can combat climate change.

“Most pesticides and fertilisers are not needed and overused,” he claims.

One of the environmental effects of all this waste is overusing products that are made by carbon-intensive processes. We should use them wisely and be more aware of the economic thresholds before choosing to spray. A complimentary solution is to look after and enhance ‘nature’s services’; pollination by bees, topsoil worked by earthworms, pest control by ladybirds.

“We understand these processes and realise they have been knocked about by modern agriculture,” Wratten says.

Another big step to reducing emissions down on the farm is renewable fuel.

The latest excitement is over Japanese grass Miscanthus x giganteus. Planted as shelter belts in open farmland, Miscanthus grows to 2.5m in the first year and 4m when ready for harvesting after two. Baled and fed into small-scale diesel processing plants, it is capable of producing 9000 litres of fuel per hectare.

The fuel is a direct diesel substitute, or ‘drop-in fuel’, that doesn’t need to be blended with mineral fuel like bio diesel. According to Peter Brown of Miscanthus NZ it is compatible with manufacturers’ engine warranties and is even slightly better than the stuff we get from the pumps, with higher cetane rating. It is also best harvested in winter, when the machinery needed is normally lying idle.

Brown says he expects to see investment in the next year here, with significant interest from farming groups. Price is attractive, at around $1.10 per litre and that can be guaranteed for a year ahead. Clubbing together, local farmers could feed and use the 150 litres of renewable fuel a unit will pump out per hour.

Steve Wratten sees this local focus as another encouraging move; “There’s not much sense in making renewable fuel and putting it in dirty great tankers.” And making fuel could provide an interesting link to our past.

Anders Crofoot, Wairarapa farmer and Vice President of Federated Farmers, cites a modern farm that is using 10% of its area for fuel crop, almost exactly the same as it did in the days of horse power.

Benefits in the hedgerow

Initial trials of Miscanthus on a Canterbury dairy farm have seen a number of benefits popping out of the hedgerow. The shelter protects a paddock from drying northwesterlies, increasing grass growth by 14% which more than makes up for the space used. Yet it doesn’t hamper the farm’s centre pivot irrigation system, and is a refuge for many of ‘natures services’ such as beneficial insects.

Irrigation also gets a ‘could do better’ in Steve Wratten’s view. “Too much spraying is prophylactic. You whack it on just in case.”

It’s not just about the amount of water you pour on: “We need to ask whether we are growing the right thing in the right place to start with.”

Development of the National Policy Statement on freshwater sets limits and that could also help reduce the environmental impact of farming, says Rick Pridmore of DairyNZ, Chair of the Pastoral Greenhouse Gas Research Consortium.

Soil holds a significant amount of carbon around the world. This has great potential, although Crofoot points out that New Zealand’s soils are far less degraded than in some parts of Australia and the US.

However he does agree with Wratten that minimal tillage is important in keeping carbon in the soil. Dry weather and wind can oxidise captured carbon and strip topsoil from a ploughed fi eld. Under careful irrigation soil “can build up organic content at quite a good clip.” Crofoot also points out that NZ farming has been improving efficiency at around 1 per cent per year, with slowly dropping emissions for a given amount of production.

Rick Pridmore says this has also been happening with emissions from dairy cattle. He sees a step change coming in the next few years, with a significant drop in methane production due to targeted breeding and potentially new vaccines.

“There’s a nice ecological spin off,” Steve Wratten remarks of renewable fuel initiatives. Bio-char, a harmless by-product of the process, can reduce methane emissions when added to cattle feed.

Ultimately, farmers grow the food they can sell and there may be a public education angle to cutting the sprays, claims Wratten.

“If people want the perfect apple, they have to understand that there are consequences.” Many sprays are for cosmetic pests, he says.

“If we boosted nature’s services we wouldn’t need pesticides in the first place, but people need to tolerate a few aphids on their lettuce.”