Home > News > Can China fix its mammoth water crisis b...

Can China fix its mammoth water crisis before it’s too late? 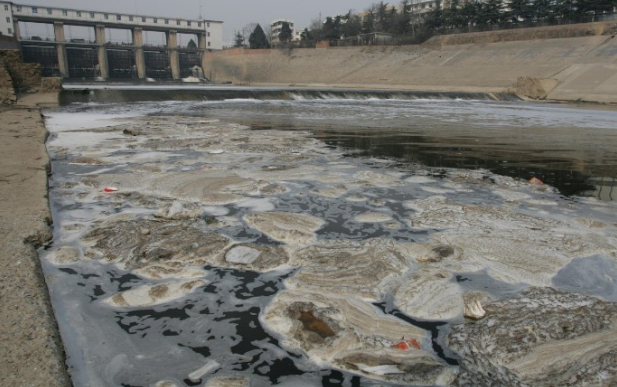 The residents of Dawu, in central China’s Henan province, say they are being killed by their water. The Ying River, a major tributary of the Huai River, passes near the village and has been heavily polluted for more than a decade — photos show children playing by mountains of pink foam.

One villager, Wu Zongjun, says pollution has spread to the underground basins and water they use for irrigation.
“(Now) there are people passing away due to cancer every year,” he says, adding he personally knew more than 20 people diagnosed in his village since 2010.

A dead chicken floats in the severely polluted waters near Wanggou Village, upstream from Dawu Village on the Ying River.
It isn’t just hearsay — in 2013, the Chinese Center for Disease Control and Prevention issued a report, showing a direct correlation between the Huai’s water pollution and cancer risk in nearby villages, nicknamed Cancer Villages.
The plight of Dawu village is just one small part of a massive water crisis unfolding in China.
The problem isn’t just the pollution that has contaminated much of northern China’s groundwater — there are also chronic shortages in the major cities, including the capital Beijing, that are putting the country’s economic growth at risk.
But now China’s mammoth bureaucracy has begun to turn its attention to the country’s water issues.
Billions of dollars are being funneled into large-scale solutions, trialled in cities and rivers countrywide, while government officials try to rein in polluters with strict new laws. Critics say some of the measures are expensive, too short-term and come with massive hidden costs.
On World Water Day, held by the UN annually since 1993 to promote the availability of clean, fresh water to all people worldwide, we examine three major ways China is helping to solve its water crisis.

Shaying River in Henan Province, a branch of the seriously polluted Huaihe River.

China’s most spectacular water project has been in the works for years. It’s an idea borrowed from Chairman Mao Zedong, the strongman founder of the People’s Republic.
“(The country’s) south has lots of water, the north has less, if it were possible, it could borrow a little,” Mao said in 1952, according to the South to North Water Diversion project’s website.
In December 2014, 62 years after Mao’s initial pronouncement, water from China’s south began to flow into Beijing, hundreds of kilometers to the north, as part of a enormous canal built from Danjiangkou Dam, in Hubei, all the way to the capital.
The eastern route had ferried more than 6.09 billion cubic meters of water from China’s wetter south to the arid north, up until November 24, 2016, the project’s website said.
By the time all three routes are finished — eastern, central and western — it could cost more than $80 billion.
It’s gone a way to solving the water shortage — but experts doubt it is a long term sustainable solution to China’s problems.
Ma Jun, the director of the Institute of Public and Environmental Affairs director and prominent environmentalist, told CNN the immense project had only given northern China a “lifeline” of water in the short term.

Laborers work on a construction site in September 2013 for the South-to-North Water Diversion plan in central China’s Henan province.
“But first we need to recognize that this is not coming without a cost and it is a high cost — environmental and social.

And even then it is not enough” he said, adding a Western link was still being built at great cost to the environment.

Ma said it was possible the massive, long-anticipated project had even led northern Chinese water consumers to overuse their resources, always confident of the imminent flood from the south.
“It’s not a long term sustainable solution … we need to take advantage of this period of time and try to truly switch our priorities from the expansion of supply to conservation,” he said.
Inside some Chinese cities, conservation plans are already underway.

South to North Water Diversion seen on November 12, 2014 in Zhengzhou, Henan province of China.
CNN has much more on this story – including more news, photos and video. Click/tap here for more at CNN.com.