Calving ‘a breeze’ in the dry North Island…for now 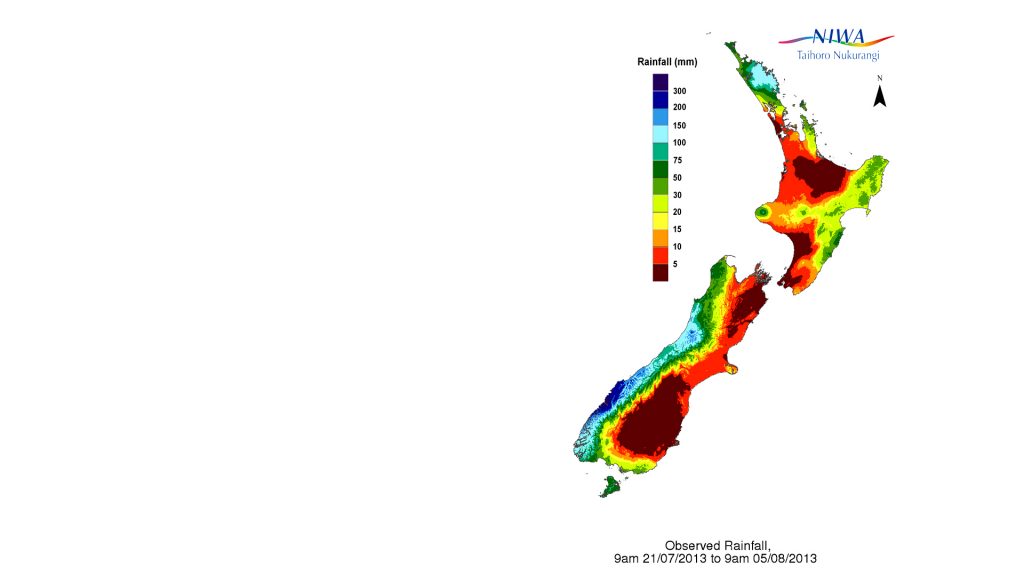 An unseasonal lack of rain in parts of the North Island is causing some mild concern among farmers, who are usually knee-deep in mud at this – the busiest -time of year.

NIWA observed rainfall and soil moisture data shows several patches of deep red in the North Island, around the Waikato, Manawatu and Bay of Plenty regions, indicating fewer than 5 millimetres of rain since mid-July.

WeatherWatch head weather analyst Philip Duncan says the NIWA rainfall data is surprising, given the areas it’s affecting are usually some of the wettest through winter.

“You look at the maps and the Bay of Plenty and Waikato in particular stand out” he says.

“These guys are normally wading through low parts of the farm at this time of year, but 2013 seems to be the exception in all sorts of areas.”

John Scrimgeour, who farms in Te Puke, told Country TV on Tuesday that they’re keeping a close eye on the forecasts, given the unusual lack of rain.

“We’ve certainly noticed the rainfall has been negligible over the last few weeks” he said.

“Because of the time of year, lambing, calving and so on, farmers have been appreciative of the dry weather.

“We’re starting to get a little bit anxious, but it’s not a major concern just yet.”

Over in the Waikato, farmers who this time in 2011 were sheltering stock from heavy flooding are calving in nearly perfect underfoot conditions.

James Houghton, a dairy farmer in Pukeatua, says the shortage of rainfall is actually helping out with the feed situation, too.

“The advantage of the situation at the moment is, even if the grass isn’t growing as quickly as when we have rain, the stock are able to eat it and utilise it a lot better.

“Sometimes they’re treading up to 20 percent into the ground, but that’s just not happening.”

Mr Houghton says when the rain does come eventually, the ground won’t have suffered damage through pugging as it would in a normal winter, and will recover to grow good pasture cover much more quickly.

Have you noticed it’s been a dry winter at your place? If you farm in the North Island, let us know what conditions are like for calving and lambing this year, and we’ll keep you updated with the latest rural outlook.

I can’t remember when we last had a such a dry and warm winter here, it’s as if the drought never really left us. If this is a sign of further severe climate changes taking place and affecting us and other countries, we need to be made much more aware.

Hardly any rain in North Waikato, have measured only 6mm since early July

Eastern Northland still had a deluge with flooding in places last weekend. I tipped out 120mls and on higher country would have been close to 200ml. looks like repeat coming next weekend.

Eastern Northland still had a deluge with flooding in places last weekend. I tipped out 120mls and on higher country would have been close to 200ml. looks like repeat coming next weekend.

I am not a farmer but I have noticed the lack of rain where I live in Stratford it feels like we have come in to an early spring so far.