Calgary: Floods start to recede, city shutdown for days ahead 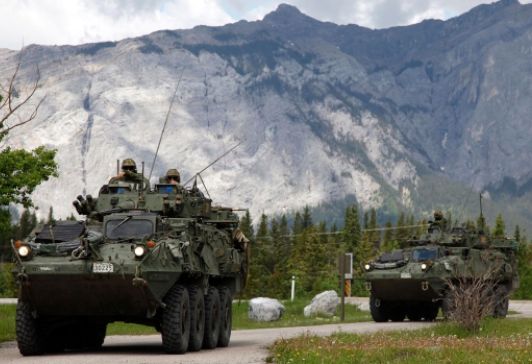 Calgary’s downtown core will likely remain closed until at least mid-week as much of the flood-ravaged city remains under water.

Although both the Bow and Elbow Rivers are expected to recede in the new 48 hours, flood officials say the downtown area is still under considerable amount of water and will remain closed until the evacuation order has been lifted.

“The number one thing that I need to share with all of you is that we’re still in a state of emergency,” Calgary Mayor Naheed Nenshi told reporters at news conference on Saturday.

“It’s sunny out, it’s nice out, but we are still in a state of emergency.”

City officials on Friday evacuated the entire downtown core due to heavy rain and flooding. An estimated 75,000 people have been forced from their homes along the two rivers.

The flooding has washed through some of Calgary’s most iconic buildings in the downtown core, including the 19,000-seat Saddledome. The indoor-arena, which is home to the NHL’s Calgary Flames, was flooded up to the 10th row of seats.

Water touched the roof of the chuckwagon barns at the grounds of the Calgary Stampede.

Despite the damage at the Stampede grounds, Nenshi reassured Calgarians that the “show will go on.”

The mayor added, however, that the city may begin granting access to some buildings in special cases but he did not say specify what buildings are being considered.

While the city remains under a state of emergency, Bruce Burrell, director of the Calgary Emergency Management Agency said the city is hoping other evacuees could be returned by mid-week.

Burrell stressed, however, that evacuated residents should not return to their homes unless they’ve been given the OK by the city. Updates on the status of the evacuated neighbourhoods will be posted on the city’s website.

If residents return to their homes before the appropriate time, they risk their safety and put added stress on the city’s infrastructure and roads, Burrell said.

“Safety remains our top priority and evacuations will not be lifted until the flood waters in the area have safely receded and the area is fully accessible by emergency services and the power and utilities are fully restored,” he said, adding that roughly 30,000 customers are without power.

While the water in Calgary remains safe to drink, Burrell said residents should limit water use.

He urged Calgary residents to stay home and limit all unnecessary travel, with the exception of getting supplies and emergency travel.

“If you want to help your city, the single best thing you can do is stay home,” he said.

Nenshi said earlier Saturday that there are no damage estimates available from the city yet.