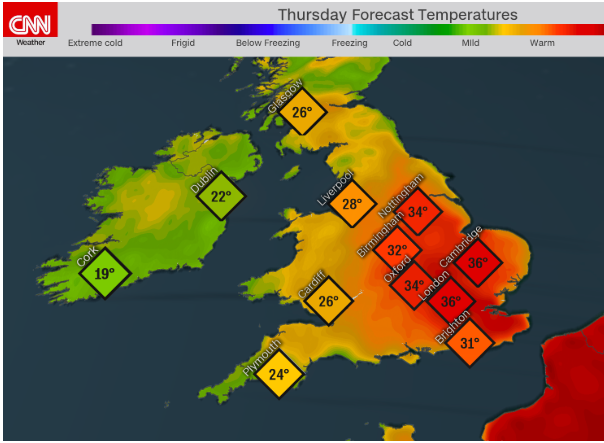 The UK is set to sizzle this week, in a heatwave that could set new temperature records for July, a new all-time record and a new overnight record..

Temperatures across the country should build from Monday to a peak on Thursday, when the mercury could reach the mid- to high 30s Celsius, according to the Met Office national weather service.
“We’ve got a heatwave potentially happening this week, with temperatures building day on day,” a Met Office spokeswoman told CNN.
London and southeast England will be the hottest parts of the country, with temperatures as high as 34 degrees Celsius (93.2 degrees Fahrenheit) Tuesday.
The heat could continue to build in central and eastern areas, hitting 35 degrees Celsius on Wednesday and 37 degrees Celsius Thursday. This would beat the July record of 36.7 degrees Celsius (98.1 degrees Fahrenheit), which was recorded July 1, 2015 at Heathrow, just outside London. 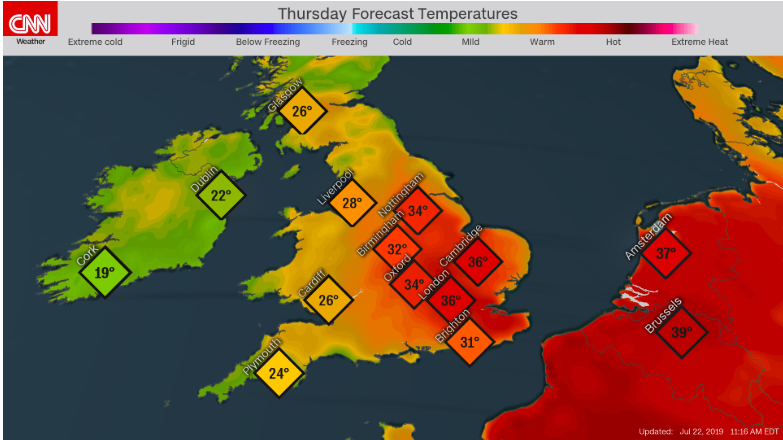 The map above shows maximum Thursday temperatures for major UK cities, rather than the hottest areas.
Temperatures that high would make Wednesday and Thursday the hottest days of the year so far in much of England.
And night won’t bring much relief. Forecasters say temperatures will stay high Tuesday night into Wednesday morning, with the potential for the July nighttime record and the all-time nighttime record to be broken.
“The highest minimum temperature is 23.9 (75 degrees Fahrenheit), that was recorded in Brighton on 3rd August 1990,” the Met Office spokeswoman said, adding that the July overnight record of 23.3 degrees Celsius (73.9 degrees Fahrenheit) was set in London in 1948.
“Potentially Tuesday night into Wednesday, we’re looking at possibly temperatures not going down to much below 24 degrees,” she said.
The overall temperature record for the UK — 38.5 degrees Celsius (101.3 degrees Fahrenheit) recorded at Faversham in southern England in 2003 — could also be at risk, the spokeswoman added.
“We’re certainly looking at a warm week across the country — the heat is quite widespread. You could see temperatures in the high twenties and low thirties quite far north as well.”
The heat wave is down to a weather setup that is broadly similar to the pattern that caused high temperatures in Europe in June, according to Paul Gundersen, chief meteorologist at the Met Office. But, he added, “conditions will feel much more comfortable for all by the time we get to Friday.”
France could also see record-breaking temperatures this week, with temperatures potentially hitting 44 degrees Celsius (111.2 degrees Fahrenheit), the Met Office said.
Temperatures in Paris are expected to top 40 degrees Celsius on Wednesday and Thursday, breaking previous records.
France was hit hard by the June’s heat wave, recording its highest ever temperature of 45.9 degrees Celsius (114.6 Fahrenheit) in Gallargues-le-Montueux in the Gard department in southern France, according to the French national weather service MÃ©tÃ©o-France.