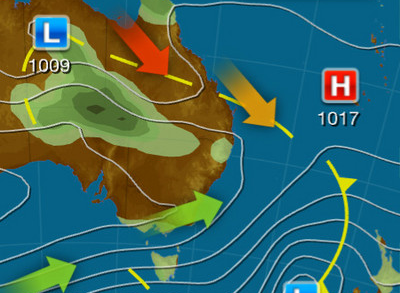 Brisbane has been sweating through the hottest September day in about two decades, with temperatures close to breaking records set more than 70 years ago.

Temperatures at Ipswich and Archerfield were also above 37 degrees.

Bureau of Meteorology senior forecaster Jonte Hall said while the mercury came close to breaking records in other parts of the state, temperatures are now set to cool.

“The temperatures actually do moderate a fair bit as we go through the weekend over southern Queensland and we get an increase in cloud cover in general as well,” Mr Hall said.

“Possibly late weekend even in to the early part of next week we’ll see some rainfall developing over southern Queensland as well, particularly the south-east quarter of the state.

“So all of those things will be good news in terms of a fire weather perspective, the cooler temperatures, more humidity and best of all if we manage to get some rainfall Ã¢â‚¬â€ that’s what we’re crying out for.”

Overnight minimums were also on the rise, with Cape Moreton in south-east Queensland having its highest ever September minimum at 21.6 degrees this morning, a record that stretches back to 1910.

Brisbane’s warmest September day on record was in 1943, when the city felt temperatures of 38.

Meanwhile, more than 15 fire crews are battling an out-of-control bushfire at Cherbourg, an Aboriginal shire west of the Sunshine Coast.

Fire and emergency services are back-burning the area and conduction water bombing.

On Friday evening, the large, fast-moving fire was travelling towards Bjelke Petersen Dam and posed a threat to houses on the southern end of Murray Road.

September records were set when , and on Wednesday in the western Queensland town of Birdsville.

Temperatures are expected to drop significantly next week.

The BOM is predicting a top of 32 degrees in Brisbane on Saturday, with maximum temperatures in the mid-20s and possible showers tipped for the days after.