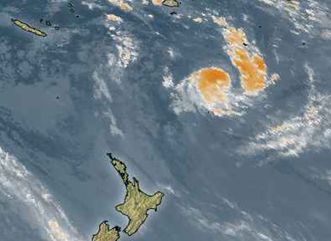 A cyclone that will be very short lived formed overnight north east of New Zealand.  The cyclone – which was not predicted to form by cyclone authorities in Fiji – is currently a weak category 1 tropical cyclone called Zaka.  It is not expected to strengthen much further and is unlikely to remain a cyclone for the rest of today.

While the path of this low is expected to track near Gisborne it currently poses no significant threat to New Zealand due to it’s predicted weakening.

Last Wednesday WeatherWatch.co.nz said the tropics north of New Zealand would be cyclone free for up to a week.  “We made it 5 days” said head weather analyst Philip Duncan.  “Not quite a week, but it certainly highlights how unstable things currently are in the south west Pacific”.

Yesterday the Fiji Meteorological Service said the chance of a cyclone forming in their region was “very low”.  Late last night they upgraded that to “high”.

“On a scale of cyclones this is absolutely at the bottom.  We knew there was a small depression and the difference between it being a small tropical storm and technically becoming a small cyclone was actually only a wind increase of a few kilometers an hour.  It’s very borderline”.

Tracking for the low – which WeatherWatch.co.nz has been monitoring since last week – remains the same, with it passing near East Cape on Wednesday bringing some rain to the north’easter tip of the North Island.

The low is so insignificant that MetService doesn’t even have East Cape in their Severe Weather Outlook.

Do you think that this year (and take out of it the La Nina or whatever one it is) is completely different than previous years in the terms of weather/cyclonic activity? My brother in Australia has been watching the weather patterns for years and, although not a meterologist, sees dramatic changes this year/late last year in weather/cyclonic activity and indeed in sea temperatures. Would be interested to know what you think.

This year does seem different – but we can’t really take out the La Nina part from the equation – as it is because of this that we’re seeing so many storms.  The warmer waters create more lows – we’ve certainly seen that.  In fact this year’s La Nina is one of the strongest (if not the strongest) on record and the warmer the seas are the more storms we have.  Climate Change scientists say that as the world continues to warm we are likely to see more extremes – such as what Australia is experiencing now.  In fact Australia is a very good example with flooding, cyclones, heat waves, droughts and bush fires all happening at the same time.  Even rainstorms in the desert!  Definitely a summer for the record books.

Thank you once again – you never cease to amaze me with your clear accurate and informative responses. You and your team are champions!

Joe Bastradi from accuweather weather has a very intersesting blog on his free european site explaining why all this is happening, floods etc in Queensland etc. What happens when you rapidly cool a large area that has been warm? The earth has cooled 0.5c in the last 7 months. Read his blog im sure you will find it very interesting. Joe is brilliant his forecasts are always spot on.