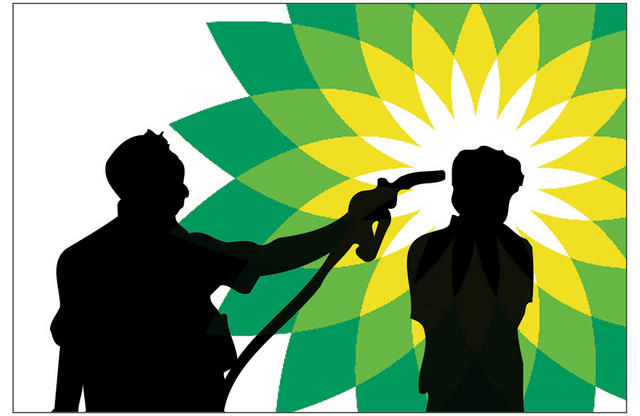 BP is clarifying comments Chairman Carl-Henric Svanberg made Friday in a broadcast interview, that BP Chief Executive Officer Tony Hayward will relinquish control over the company’s daily operations in the Gulf of Mexico.

BP spokesman Robert Wine tells CNN that Dudley’s duties involve political and community relationships. Dudley is from Mississippi, a state whose coast has been greatly affected by the oil spewing through the Gulf since the BP-operated Deepwater Horizon rig exploded off shore almost two months ago.

…just like a jigsaw puzzle, when you first start out…but as you keep finding new pieces, the picture starts to look a lot clearer and starts to make sense…

…and so it seems with this so – called oil “spill”…

I did state earlier that I didn’t think it was a conspiracy, but others are now saying that this was a ‘contrived event’, and with good cause….as they front up with some damning pieces of the puzzle, to back that claim…

…here are some of the pieces they have come up with…see if you can put them in the correct place..

1) back in February this year they discovered cracks in the strata they were drilling into – BP use riskier options to seal the leak, in spite of technicians on the rig questioning the move, which has been described as negligent, and even “criminal”

2) a week before the explosion, BP executive dumps one third of shares in BP

3) efforts to clean up the spill have been constantly hampered and frustrated by BP and the Fed, and considering this is meant to be major disaster for the U.S. and potentially the world, efforts at clean up have been half hearted and pathetic

4) a virtual blockade around the oil spill for everyone except BP and the Fed
– excluding the news media and others, public including

6) 16 Louisiana State barges were intercepted by U.S. Coast Guard and ordered to stop cleanup and sent back to dock

7) Oil clean – up workers gagged by BP to talk to media about what is happening and what they are finding . What are they finding??? Methane?

8 ) every effort is being made to stop the truth about the oil spill getting out – what we hear is what BP and the Fed want us to hear!

11) almost forgot! Obama goes on holiday immediately after the explosion and finds time to keep his hand in on the golf course, of course! [ shades of ‘ my pet goat!’- 9/11 ]

…should have read Haywood instead of Halliburton…oh well….

I realise the oil well is at a great depth, far deeper than any previous drilled & stopping the spurting oil aint going to be easy, but the thought of nuking it is hopefuly far from their minds. Very scary thought.
I believe the oil coming from the well now is much darker & a thicker consistancy, which is going to cause
more concern for marine life & become very difficult to remove.
Meanwhile that lovely man, the CEO has been out enjoying himself watching the yacht racing, oh yes !!! thats right, his words, ” getting his life back. ”

Of Course Tony Haywood & his cronies are responsible for this oil disaster, taking short cuts & cost cutting is is very much on their agenda, only have to read what the oil rig workers had to say. But the government should come down harder on those responsible.

I agree with you David, a lot BP have hidden from public view

tku Meescha…from what I have gathered, the U.S. Govt issued the permit to BP, and from what we are now learning is that this was a ‘super deep well’ – never before done by man ( or woman…he he.), and has apparently unleashed something they weren’t expecting – so it doesn’t appear to be a conspiracy, in this case…..this is not to say someone will not use it to their advantage!

…they have hit a deposit of oil – non fossilized, or abiotic in nature, at this extreme depth ( around 25,000 ft below 5000ft of water ) – apparently, and they can’t do anything to seal it ’cause it’s just too big – it is beyond human capacity to control it!

…thus any talk of ‘nuking’ it to seal it, has certain experts in this field ‘scared to death’ should that be tried – if they try to and are not successful, and they fracture the strata they have drilled into, the flow will never stop!

…and there’s more….but that will do for the meantime!

I think we can all agree that jumping on the bandwagon to diss Tony Hayward doesn’t make an eyeotre of difference to the effect of this disaster, and don’t kid yourself that you’re whinging will somehow make the oil companies buck up so this won’t happen ever again. Tony Hayward, like all CEOs is just a chump who does what is required to make money for his company.. Could they have had more safety mechanisms in place? Sure. But in a cut-throat market where profits matter, why would they bother? If you wan’t to blaim someone, blaim the US government.. but I guess that wouldn’t be as fun as lumping all of your petty outrage and hatred onto one man.. I can understand why self-interested US congressmen lambast the guy.. but you achieve nothing by doing so other than making better informed and less reactionary people cringe at your pathetic glibness.

What OMG !!! that poor excuse for a man still in charge ~ guess its more of the same, when confronted for questioning ” I dont Know ” with smug grin, usual response, , pathetic..
He doesnt give a damn about the environment & its wildlife. Throw Tony Haywood into the oil polluted ocean give him a taste of what the birds & marine life are enduring,…see how he copes…
I have heard some horrific stories by people who witnssed turtles caught up in booms, being scooped up by BP workers & burned alive., to hide the evidence, how bad is that.
Meanwhile oil continues to gush into the oean, toxic despersents sprayed on by the thousands of gallons, turning it into a deadly cocktail, killing all sealife in its wake. The long term effects on the health of the people (many of whom are not wearing any protective clothing) cleaning up this mess on beaches is unknown.
As for BP workers soaking up oil on beaches by laying a few paper towels, what a sick joke & insult to the people of the gulf.

…and what about that Live Video Feed … I don’t see any oil gushing from the well head – and speaking of the well head – a good pressure reading from an oil well, would be around 1500 psi. The readings from this well head were estimated or reported between 20,000 and as high as 70,000 psi ( and automoblie tyre is around 30 psi for comparison sake)

… based on those readings, there should be an awful lot of turbulence around the well head, which would make it extremely difficult to work around, man or machine – so far we have seen no evidence of this, and so it is fair to conclude that we are not being shown the actual well head which is spewing all this stuff, because it is of such catastrophic proportions, that everybody would be ‘flipping out’!

What do you think?