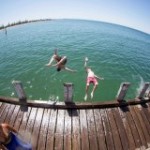 Extreme heatwaves are forecast to sweep through parts of Australia over the Christmas and New Year period, with some locations set to swelter in the 40s for days on end and average temperatures up to 12 degrees higher than usual.

It is part of a sustained heatwave affecting parts of South Australia, Victoria and New South Wales.

In the days after Christmas, the mercury will push 46 degrees Celsius at Coober Pedy in South Australia and 45 at Mildura in Victoria and Hay in New South Wales.

It will be the first time that Mildura, on the Murray River in Victoria’s north-west, has had five consecutive December days above 40C, with the previous record of five days set in 1931.

In Wagga Wagga, highs above 40C are forecast for at least four consecutive days from Thursday onwards after a high of 39C today.

In the capital cities, Adelaide will reach 41C and Melbourne 35C on Thursday, and Canberra will swelter through the mid to high 30s for the rest of forecast period, peaking at 39C on Saturday.

Sarah Fitton, an extreme weather meteorologist with the Bureau of Meteorology, said heat had been building up through central parts of Western Australia.

“No cold fronts to flush that hot air away so it really is just building,” Ms Fitton said.

“And then as we head into the later period of the week, we’re going to see a trough come through and that’s going to effectively grab that hot air through WA and really start to see it increase even further over the south-eastern states,” she said.

Heatwave conditions are currently in the Gascoyne and the Pilbara and they’re expected to move eastwards over the next few days.

“As we head into the middle of the week, we’ll start to see severe heatwaves develop through South Australia, through northern Victoria and southern New South Wales,” Ms Fitton said.

“And then they’ll intensify towards the end of the week as the temperatures do become even more above average. So we’re expecting extreme heatwaves.”

The hot conditions will also be accompanied by strong winds towards the end of the week, creating dangerous fire conditions.

But hopes for a Christmas miracle in the form of cool change may be unrealistic, with Ms Fitton warning Australia’s hot flush will be sustained.

“We are looking at a prolonged period of heat,” she said.

“As we head into New Year’s Day, we might see a slightly more significant change over southern states, but it really means that heat is still going to be sitting up through New South Wales and southern Queensland,” she said.

“It may not be enough to completely flush it away at this stage.”