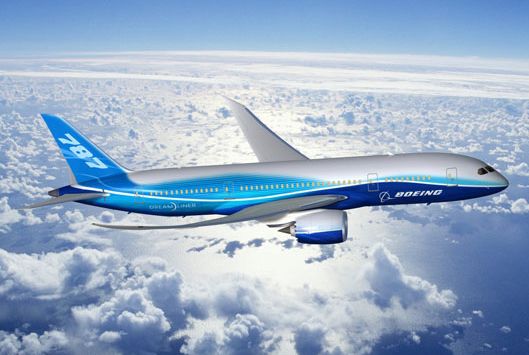 And you thought your last flight was late?  When the inaugural commercial flight of a Boeing 787 Dreamliner arrived in Hong Kong today, it was more than three years behind schedule.

The plane, the first commercial jet made from a light-weight composite carbon fiber material rather than aluminum, has been in the works even longer than that.

Boeing (BA, Fortune 500) announced plans for the 787 in December 2002. The cost-saving plane, which uses about 20% less fuel than a comparable jet, was the aircraft maker’s answer to the financial crisis that hit airlines after the Sept. 11 terrorist attack.

The twin-aisle jet that holds between 210 and 250 flyers is also supposed to be a better experience for passengers, with the composite skin allowing more enjoyable cabin pressure and humidity levels, and the fuel-efficient engines providing a quieter ride. There are also bigger windows and larger overhead baggage compartments.

But it’s been a long wait for passengers, airlines and investors. Boeing started out promising the plane would be ready for service in 2008.

Yet, even with the delays and Boeing being years away from recouping billions in research and development costs, the plane can be considered a game-changing success for the aircraft maker by some measures.

Customer demand for the composite planes has been strong — more than 800 orders are on the books, by far a record before a jet’s first flight.

And the biggest change in how the plane is made might not be in the composite skin, but in the way many parts are assembled by suppliers spread across the globe, rather than by Boeing itself.

It’s a form of outsourcing that has worked well in much of manufacturing, but is greatly responsible for the delays in the plane. Getting the system to work more smoothly going forward will be an important driver of future profitability and reliability.

“It’s certainly a disappointment that it’s so late, but ultimately it can be a success,” said Cai Von Rumohr, aerospace analyst with Cowen & Co.

The concerns over the delays have been a big drag on Boeing stock in recent years. Von Rumohr said he’s hopeful investors will be reassured once they start seeing regular deliveries and a modest operating profits from the 787 program in the third and fourth quarter of this year.

“Usually once the plane is certified and the first ones are out the door, things get better,” he said.

The Federal Aviation Administration and European authorities have certified the Dreamliner as safe, after nearly two years of test flights. But the U.S. Government Accountability Office issued a report this month stating the lack of history in dealing with a commercial plane made of composite carbon fiber material, rather than metal, raises “safety-related concerns” regarding the future repair and maintenance of the aircraft.

“None of the experts believed these concerns posed extraordinary safety risks or were insurmountable,” the report stated.

“FAA is taking action to help address these concerns identified by GAO, related to the repair and maintenance of composite airplane structures. However, until these composite airplanes enter service — it is unclear if these actions will be sufficient.”

Boeing issued a statement saying that it is confident its testing prove the safety of using composite materials in a plane.

“These issues already are being addressed through an industrywide effort involving regulators, manufacturers, operators and maintenance and repair organizations,” it said. “This is a great example of how all stakeholders work together to ensure safety continues at today’s high levels.”

The fuel-efficient engines by either General Electric (GE, Fortune 500) or Rolls Royce are likely to find their way onto other aircraft as well. Already, Boeing is using some of the GE engines on its new 747 models.

Boeing was making many of the sales when airlines were dealing with losses, consolidation and tough financing. While the list price for the jet is $193.5 million each, steep discounts of about 25% were reported for earlier buyers. That, and the lure of lower fuel purchases going forward, was enough to keep interest strong.

“The good news is the customers like it. The bad news is they were pricing them at a low price,” said Von Rumohr. He thinks the pricing environment will get better going forward.

The first flight will be by Japanese carrier All Nippon Airways from Tokyo to Hong Kong. American fliers will probably have to wait until Japan Airlines starts flying from Tokyo to Boston in April of next year before they can board one at a U.S. airport.

United Airlines (UAL, Fortune 500) will be the first U.S. carrier to take delivery of the plane, also scheduled for 2012, but it plans on using it on a Houston-to-New Zealand route. The plane is designed for long-haul routes, so it could be a while before it is put into service even on transcontinental U.S. flights.