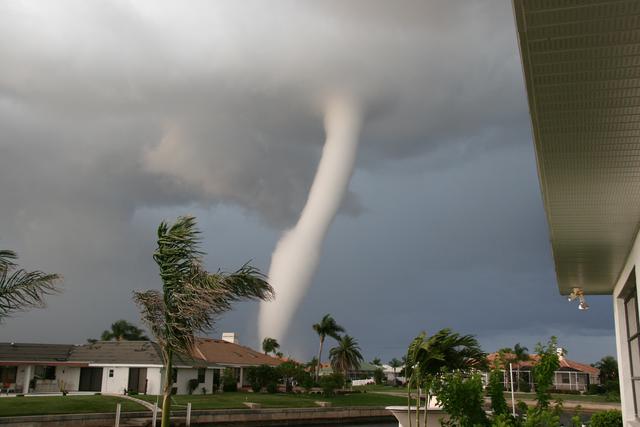 Fortunately in this part of the world we don’t encounter either a tornado or cyclone on a regular basis but which powerful weather phenomenon can be more destructive?

Tornadoes as we know can have an extremely high wind speed which is capable of causing destruction but over a relatively small area usually.
In New Zealand they don’t tend to last more than a few minutes whereas in the US some have been known to last for hours and spawn other tornadoes during this time, causing widespread devastation and claiming many lives.

Cyclones, hurricanes and typhoons are obviously all one and the same thing and although there is usually more warning about these monstrous beasts as they approach populated areas, they can cause more devastation over a far wider area and for a prolonged period.
They may not notch up the windspeeds that a tornado can but sustained winds over a number of hours at a relatively high level, can cause more damage overall.

Rain is also accompanied with cyclones and torrential falls are common which may result in some serious flooding plus storm surge is likely in coastal areas vulnerable to the tempest which creates even more havoc.

Tornadoes often contain rain, hail and lightning (and hail can cause considerable damage) but it tends to be relatively shortlived and the damage is confined often to the path of the tornado and nearby surrounds.

Fear often plays a part in people’s reactions to nature’s fury and not all of them are necessarily predictable.
If you find yourself in a situation where you’re facing a tornado or a hurricane, which would you rather have to face(if you had a choice) and what would you do?
Some people hang around to take in all the action and record it all on cam whereas others are on the first plane or taking cover as quickly as they can!
I just might be in the first category.

….and meanwhile back in New Brighton it’s a pleasant enough Autumn day, with a current temp of 20 deg C, weak sunshine through a veil of cirrostratus and altostratus , and very little wind , and that from the north…8 – D