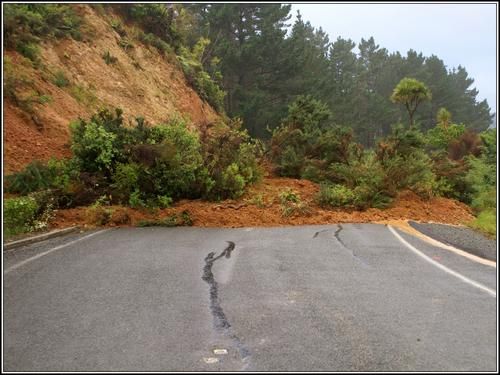 By Philip Duncan — Record heat, severe gales, flooding, slips and a deadly tornado sum up the first few days of May 2011.

The Albany tornado was as spectacular as it was terrifying, and I’m amazed the death toll stands at only one.

Auckland had just a tiny taste of what America has just experienced; more than 350 people, from the southern states of America, lost their lives to twisters last week.

The TV studios where I work at Country99TV are based in Albany. It wasn’t hit by the tornado – but the new soundproofing installed in the news and weather studio was no match for the deafening rain.

“The rain came down in sheets and you couldn’t see out of the window,” says Neil Parker, the news producer.

“It was so loud I had to shout at the guy at the next desk. It was as if a hundred horses were galloping on the roof.”

During the past few weeks I’ve read descriptions such as a ‘one-in-one hundred- year flood’ or ‘worse than Bola’, and it got me thinking – what are the biggest weather events that I have been in? So, here they are, my top 10 weather moments, building up to the most memorable:

10 Alexandra heatwave
My brother was married in Clyde, near Cromwell, in January 1994. The heat that day soared to 36C.”It was absolutely stifling,” my mother, Hazel, remembers. “It was one of the hottest days I can recall in New Zealand and the best man had to hire an air conditioner which hummed all through the service but did help a little.”

9 Blizzard,Canada
I was in a blizzard, albeit brief, one evening in Canada. I had arrived off the train with my then wife in a small town in Ontario, to be hit by gale force winds and snow. While it lasted only 15 minutes or so, it was a surreal experience for this North Islander.

8 Waikato thunderstorm
While at my parents’ home in Te Aroha on a September evening years ago, we watched as a belt of thunderstorms moved across the Hauraki Plains.

One flash of lightning had thunder instantly (no delay) and the noise was piercing. The next morning, some 10 hours later, we found smoke and flames coming from a pine tree on the paddock across the road. The lightning bolt split the bark the length of the tree -but the tree lives to this day.

7 Cyclone Drena
It was January 1997 while we were camping at Hahei that we heard reports of a cyclone coming to New Zealand.

Those that remained in the grounds (only a few, and I was one) had to tie their caravans down and park cars in front of them to as a buffer. Between the pine cones landing on the roof, and wondering if the caravan would blow down a bank, I had little sleep.

The next day we were isolated by floods, but the winds didn’t live up to the hype. I remember One News crossing live to reporters the night before, all of whom were standing in calm, dry, conditions.

6 Minus 24C
On my first trip to Canada in January 1988 to visit family, we visited Lake Louise in the Rocky Mountains. I was standing on the frozen lake and the air temperature was minus 24C. It’s hard to describe that coldness unless you’ve experienced it yourself – but the best description is like someone is punching your bones.

5 Cyclone Bola
I was living in Te Puke 1988 when this hit, and I have memories of rivers and streams in flood; torrential rain lasted days. I also remember the highway bridge crossing the Wairoa River was washed away. For a long time motorists had to share the train bridge, which felt like a good Kiwi solution!

My mate from Te Aroha College, Glen Chappel: “We got hit really badly, flooding was everywhere. Winds were severe too – just a really rough couple of days,” he said. However, the floods in Hawke’s Bay last week were thought to be worse than Bola “The damage we’re seeing makes Cyclone Bola look like a Sunday picnic,” emergency management officer Bruce Kitto told the Hawke’s Bay Today. Dennis Bell, who has farmed close to Aramoana Beach for 41 years, said the flooding was devastating.”

My father showed me photos of the famous 1938 flood-and this is far worse,” Bell said. It was definitely worse than Bola, he added.

4 Edgecumbe quake
Living through a 6.3 magnitude quake was the scariest moment of my life – at least, until that evening in March 1987, when the thunderstorms hit. They were more frightening. The power was out, the thunderstorms lasted all night and, to make matters worse, we were hit by dozens of aftershocks. Someone described it as Armageddon… and it felt like it.

3 Auckland tornado/squall
In 2007, days after I built a fence around my Te Atatu property with my own hands – and the hands of my helpful father – a squall (or weak tornado) slammed into my house. It split the five-storey gum tree on my property in half and destroyed much of the new fence.

The windows in my bedroom flexed so much we had to rush to the other side of the house, thinking they would implode or the roof would go.

Inspection of the rooftop the next day revealed many nails had been slightly raised.

2 The Great Storm of 1987
In 1987 I lived in London for six months. The weather was mostly forgettable. And, in mid-October, BBC weather forecaster Michael Fish dismissed the possibility of a storm hitting:

“Earlier today, a woman rang the BBC and said she heard there was a hurricane on the way,” he said. “Well,

if you’re watching, don’t worry, there isn’t, but having said that, the weather will become very windy, but most of the strong winds will be over Spain and across into France.”

The next day, England was hit by The Great Storm-the biggest storm to hit the country in 284 years. It roared in from the Atlantic, killing 18 people. Gordon Kaye (Rene from ‘Allo ‘Allo) narrowly missed being killed when a tree hit him in his car. The storm was declared a rare event, expected to happen only once every several hundred years.

1 Cyclone Fergus
Nine years after the Edgecumbe quake came the scariest weather event I’ve experienced. I was in my Waikato hometown of Te Aroha in December 1996, when this big ex-cyclone roared down from the tropics. When a tropical storm hits New Zealand the town of Te Aroha often receives the strongest wind gusts.

We recorded gusts of 180km/h on the hill above our house, while the NIWA weather station broke at about 220km/h on top of Mt Te Aroha.

Much of the town was shut as trees littered the roads, windows blew in and brick walls were blown apart. Barns were blown across farms and power was cut. The noise was like a constant line of trucks driving by.

Like most weather forecasters, I love severe weather… but I think if I was to experience another Fergus I’d want to be in a concrete bunker.

The weather can be beautiful, exciting, scary, adrenalin-pumping, shocking and deadly. It gives us life – but also takes it away. With that in mind, I suppose I do look forward to my next memorable weather event. But, when you are suddenly looking down the barrel of something so powerful and potentially life threatening, it’s amazing how quickly the weather passion evaporates and is replaced by genuine fear.

This was fabulous reading. Thanks so much for sharing. I love wild weather too, its invigorating

We cant complain about May in Auckland so far,inspite of easterly winds a couple of days the leaves only come from that direction only for another month and temporary till next year and is preferable over the SW direction by a long shot and rain about normal and warm temperatures 20-21c each day.

This May has also had a very dull start for many places – lowest ever totals of sun for first 7 days at Nelson and also probably at Ch’ch. Will be checking Wellington’s stats for the first 2 weeks of May in that context.

The 67mm Alexandra had in one 24-hour period matches the highest previously recorded there for the whole month of May.

I remember Fergus – I had just moved into the house I had bought in Te Aroha. I had to go out and buy new window catches for some windows because the windows kept blowing open!!

Interesting the comment about Te Aroha copping the big winds, I would have thought with the Kaimais
along-side the town, you would get some shelter from the easterlies at least ? What causes the extreme winds there – any theories going round ?

HI Greg – if you imagine the air as water then the Kaimais are a dam.  On the BOP side the air pools up before spilling over (and rushing down) the Waikato side.  As the air tumbles down the Te Aroha side it is also squeezed through valleys – which is why it’s much stronger.

The air can bounce too…sometimes we’ve seen severe gales in one street and almost calm a block over…then a kilometre out on the plains the wind bounces back down.

In the South Island we see the same thing with the nor’west – conditions are a bit windy on the West Coast but the severe gales form east of those ranges as the wind roars down the other side.

Hi Phil
Yep I was in Te Aroha in Cyclone Fergus. I in fact left my house for safety as branches were thrown through windows like spears. Definately the most scary weather I have ever seen. The next day I filled a truck with branches in the cleanup, & ended up with a new roof after half the roof came off.

I remeber living at Lake Tekapo. In 1982 Labour weekend we had a huge thunderstorm at lunchtime Saturday, after that it snowed non stop until the Labour Monday, 24 inches around by then.
Also 1986 we had a big Nor’wester gusting to 225kms per hour blowing down the lake, I remember watching the glass window facing the wind bowing in and out by about 25mm, a bit disturbing to say the least.
Oh and no surprise to hear a BBC weather forcaster getting the forcast wrong, didn’t they forcast a summery winter a couple of years back, only to have a winter from hell, say no more.