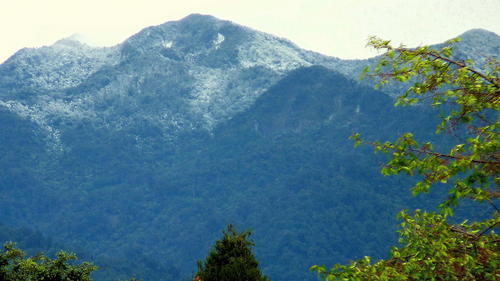 The weather isn’t always a headline maker but it certainly affects us more than many of the news stories that we read about each day.

I’m assuming the most frequently talked about topic on Monday wasn’t John Mitchell being stabbed, or Millie Elder going back to court, or Paul Henry’s unfortunate resignation – or even the weekend’s election results across the country.

No, I’m assuming it’s the cold snap in the weather which affected us all – even if it was just that bitterly cold southerly as we rushed from our car to the office.

Granted I haven’t done any polling on this…or, for that matter, anything scientific, but when I heard people talking yesterday they seemed to be mentioning one thing – the cold snap. “Ohh that wind is right off the snow” said one lady yesterday morning when I was at the bank. She’s fairly accurate.

At 8am on Monday it was raining in Taupo and just 3 degrees…it was the same on Banks Peninsula. Across New Zealand a gale southerly has blown in and reminded us that spring isn’t just about wind – that it’s also a mixture of hot days and cold ones.

As of 12 noon yesterday it was only 8 degrees in Auckland and WeatherWatch.co.nz had reports of snow falling on the Mamaku Ranges near Rotorua – certainly not out of the question for this time of the year but a bit of a change from the 18 and 19 degree highs of late in the area.

Spring and Autumn are all about the change of seasons – from warm to cold or vice versa.

Last year we had a cold snap around the same time that saw snow falling on Mt Te Aroha on the Kaimai Ranges just 100kms from downtown Auckland. So it’s not out of the ordinary to get a brief cold snap like this in October – in fact in can happen in November too, although less likely.

The good news is that a high is moving in for the South Island. The bad news is that a new low will form north of Bay of Plenty – and because it’s in that location it means rather than fuelling warm northerlies over us (which it would do if it was to the north or north west of us), it will continue the strong, gusty, cooler south easterlies until at least Wednesday night.

Next month I think we will start to see a significant shift in our weather – away from the sou’westers and back to the northerlies that dominated our weather at the end of winter. That unfortunately means more rain for the north. But with La Nina conditions developing stronger than they have in a long time it may just be a matter of weeks before we start to see some serious tropical storms forming north of the country, especially over the Coral Sea – a breeding ground for monster Category 5 cyclones.

For those in Queensland that have battled with one flood event after another in recent years this is not the news they will be wanting to hear. The 2010/11 cyclone season starts in November and this one could be a very active one.

Hi
Will NIWA still go with a dryer than average scenario in the North and east for the next three months ,I wonder?

I do enjoy your writing style, Philip Duncan! Could you mention Wellington’s weather fate a little more often?

Why thank you Kate W,

We will try to mention Wellington more often… if you can ever give us a heads up on conditions in your area that always helps too.