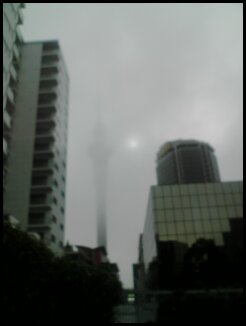 I feel like it’s been days since the cloud cover rolled in and we started talking about this large storm in the Tasman Sea.  Yesterday’s foggy conditions, most noticeable in Auckland, wouldn’t have happened if the low had been on time – with winds to blow the fog away.

The heavy rain is still on the way though but these large, slow moving, lows are painful to predict sometimes.

On the satellite map the low is now becoming clearly visible roughly half way between the Far North and the Gold Coast.  Dramatic looking clouds spill down over the North Island and upper South Island.   As of sunrise the rain was now spreading down across many northern regions.

Yesterday the low slowly formed but stalled.  So it wasn’t moving towards New Zealand at all.   There wasn’t a breath of wind which saw foggy conditions last until lunchtime in Auckland then return again the second the sun went down.   A big contrast from the frosty, cold and cloudless days seen recently.

I think the heaviest rain should arrive tonight and Monday morning for most places with perhaps another burst for more eastern parts of the North Island later on Monday early Tuesday.

Those winds will pick up too…. Auckland, which oddly hasn’t had much wind for what feels like weeks, will notice the nor’easter building today and in to tonight.   Gusty conditions are likely tomorrow on the gulf and the strong winds should also spread down across eastern Waikato and into other western parts of NZ including those near the Tararuas, Mt Taranaki and the West Coast.

Temperatures are pretty crazy at the moment… I don’t how many Alexandra readers we have but I feel for you this week!  Under overcast skies the daily highs have hovered near freezing…a high of zero recorded on Friday (yep, that was the high) and highs of just 1 or 2 all week.  Meanwhile in Northland it’s been getting to 17 and 19 thanks to that humid, wet, air mass.

Overnight lows in Auckland and Waikato will take a big jump this week too… with some places climbing by as much 12 degrees on last week.   Cold easterlies mean east coast parts of the South Island will only be reaching around 7 or 8 degrees as the daily high for much of the week.

The low doesn’t look quite as intense as it did by the computer models last week… but either way we’re in for a wet, warm and windy few days for many places in the North Island and a cold, cloudy, week for those in the South.

Was pretty windy going up over the kaimais on SH29 sunday afternoon, in a ute full of household goods and a trailer. Very wet as well, huge amounts of spray from trucks going in opposite direction.

It’s rather stormy in Palmy now, my backyard and driveway is one big slosh and because i live in a sleepout, getting back to the main house will be yet another mish!!

still a tad cold and the wind picked up about 3pm but its gettin rougher 3.5hrs later [6.40pm]

This morning was a bit fun. Headed into the city at 9.30 from Albany. Lots of standing water on the road which made the majority of the trip between 60 – 70kmh as you simply couldn’t see or were trying to avoid hitting huge puddles forming on the outside of the lanes, particularly around Tristram ave.

Driving back up was at 1ish was not as bad, except for bridge the two lanes over the centre were acting like just one single file as the wind rocked the cars and rain poured down, most cars going over at around 40kmh, some of the worst driving weather I have seen in a while.

I thought Whangarei was going to be very wet lastnight…? It’s still only foggy drizzle. Disappointing, I hoped for a good stay at home storm.