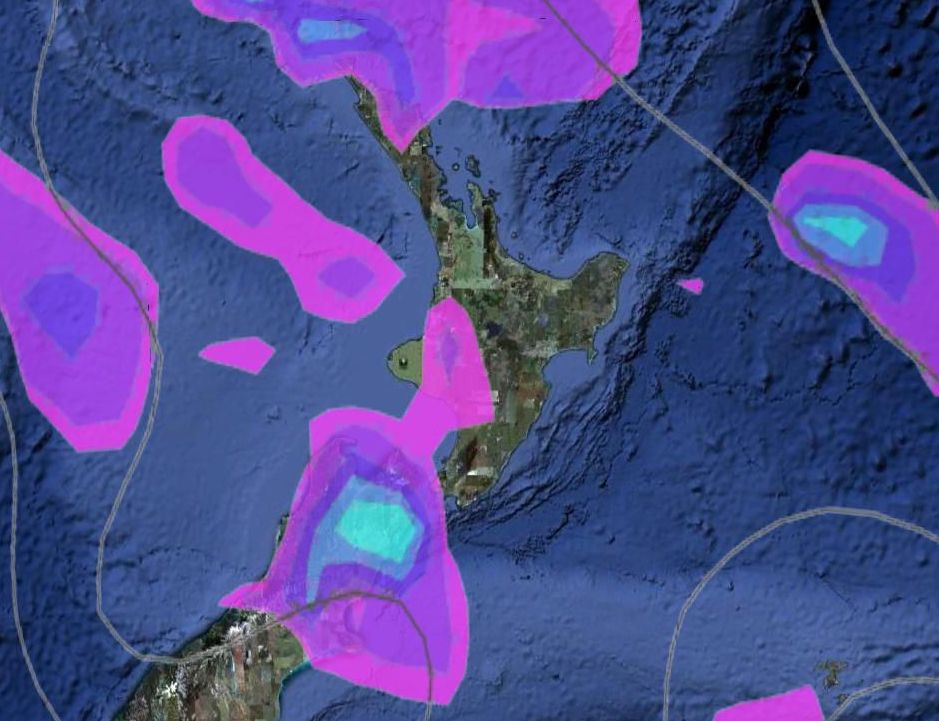 A low that’s almost the width of the Tasman Sea, sounds impressive right?  Well not this time around.  The low that is coming to New Zealand has such high air pressure it’s only barely classified as a low.

A low is measured by the fact that surrounding air pressure is higher.  In this case, the high over New Zealand and the high over Australia both have a central air pressure reading of roughly 1020 to 1025hPa.  The low is around 1010hPa.

What does that all mean?  Well it means the atmosphere is, for the most part, stable – and when the atmosphere is stable the weather is generally fairly quiet, with lack of wind and the clouds have a firm ceiling on them – which often limits how heavy the rain can be.  When we have a deep low we get towering clouds that produce thunderstorms, squalls, hail and surrounding that low we often have gales.

To put it bluntly, this low is fairly pathetic.  Our data shows that while rain is likely across a number of northern and western regions this weekend, it is just as likely to be dry.  That means the rain clouds will be fractured and broken up.  It’s a weather forecasters nightmare if we’re asked to be specific.  For example “Will it be raining in Hamilton at 2pm on Saturday”.  An answer of 50/50 isn’t really much help.

So we heavily rely on computer models.  It’s a bit like landing a plane in poor visibility – the computer guidance is vital.  So our models and data tells us there are going to be about three rain bands that will pass over the country this weekend.  But they are weakening and intensifying all the time.  They might weaken just before reaching your house – they might intensify shortly before.  It’s this “chaos” that still stumps weather forecasters around the globe…and to be honest I don’t know if it will ever be 100% predictable. (And to be even more honest I don’t know if I ever want it to be… there’s a magic about the weather being surprising, even if the payoff causes some frustration).

To make matters worse, the system is big and slow – which means some areas may receive a long period of rain, making rain warnings a possibility.  So rain warnings in one region, mostly dry in the other.  I think the ranges of the West Coast and Nelson will get the heaviest rain.  Its possible that a band of rain might fire up once it clears the land of Auckland and Coromandel Peninsula on Sunday too – which could produce heavy rain for eastern Bay of Plenty.  Judging by the rain prediction maps at Weathermap.co.nz this looks quite likely – but much of it looks set to fall out at sea.

So my prediction is this – the weekend will have long dry spells but wet periods are possible too.  Don’t plan for a dry weekend, don’t plan for a solidly wet one.  In fact the best way to sum up this weekend is “showery” – even if the rain that falls doesn’t fall into the shower category technically (A shower is less than 30 minutes of rain covering a fairly small area – for example covering a town rather than an entire region).

All I can be is honest – and the forecast for Saturday especially is definitely a tricky one.  Many forecasts say rain developing – but the rain may not be much for some, but heavy for others.  Patchy and unpredictable.  Definitely a day when our forecasts will be updated more often than usual to try and stay one step ahead of the weather (in other words, to keep them as forecasts and not nowcasts!)

It will be interesting to see what NIWA’s supercomputer is saying at the moment – hopefully the tax payers will have public access at some stage in the future…it certainly sounds like a great and accurate tool.

I agree with you Sue. Up here in Wayby we could do with a good drenching now.
Looking west just before dark tonight looks very hopefull.
Cheers Steve

Hate to say it but …. enough fine weather for the moment please in WGP! We reeeeeeeeally need some rain out here in Army Bay to fill up the tanks. I was really looking forward to a bit of a stormy yucky weekend so that I could knuckle down with my study books and not be tempted to go sit in the sun. Darn it – looks like I could be disappointed.

Heavy rain since midnight in Westport has resulted in 65mm of rain here. A very heavy/torrential period before dawn. The rain has stopped now but many of the roads are under surface water. Police scanner indicating also that houses in Waimangaroa have water going up inside. A number of the roads around westport are impassbale due to flooding. I had to hope into my car on the passenger door due to surface water. Anyhow, it seems looking at the new model runs the worst is over and it will be the odd isolated shower for the next couple of days. Metservice say Rain with heavy falls for tomorrow also but the models dont back that up anymore.