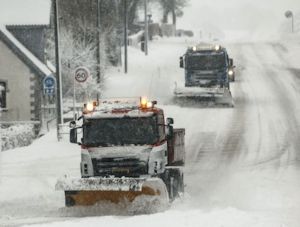 A major snowstorm blew across the Upper Midwest of the US yesterday, dropping more than up to 35cm of snow in rural parts of the state of Minnesota and up 30cm in the metro area of Minneapolis/St. Paul.

The snow caused 600 traffic accidents, cancelled about 150 flights and forced many school districts to either close for the day today or delay their start times.

Cold air is now being wrapped around the storm system as it moves off to the east.  Highs today in Minneapolis aren’t expected to get out of the double digits below zero.

No deaths have been reported

Meanwhile, freezing temperatures and heavy snowfall have killed at least five people and caused travel chaos across the Balkans, with rescue teams struggling to reach passengers stranded in buses and cars in Serbia on Sunday.

Officials said four people have died in Croatia and one in Serbia as a result of blizzards in the region of southwestern Europe over the weekend, closing airports and roads and blocking public transportation in big cities.

People traveling in vehicles waited for hours on several roads in Serbia’s northern province of Vojvodina, including the main highway leading from Belgrade to the Hungarian border, before rescue teams could free them from 50cm of snow that had fallen in just a few hours.

Ivica Dacic, who serves as Serbia’s prime minister and interior minister, ordered all available police personnel to take part in the rescue operations.

The airport in Zagreb, Croatia, was closed for several hours Saturday, and several of that nation’s roads were closed because of high winds and heavy snow. The situation improved in Croatia on Sunday, but a warning against driving remained in place because of icy roads.

Authorities in Serbia and Croatia warned people to stay indoors.

As the storms headed east across the Balkans on Sunday, Romania’s army was trying to clear snowbound roads as the country voted in a parliamentary election.