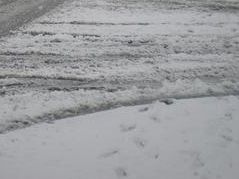 Many countries in the northern hemisphere are being plunged into a white winter, a number of weeks before winter even starts.

In a reverse to New Zealand’s early summer countries like England, Scotland, America and a number of other nations have had huge early snowfalls.

Flights across Britain and Europe have been grounded while motorists facing snow drifts of 2 metres (same height as the common door inside your house) trapped motorists for a day in New York state.

WeatherWatch.co.nz says the cold snaps overseas and the heatwave at home appear to reflect what scientists have been warning about for the past decade.

Many scientists says climate change is about global extremes and not just hotter weather.

In an interview with Newstalk ZB in Wellington on Saturday Philip Duncan – head weather analyst at WeatherWatch.co.nz – said that the title “global warming” has probably done more harm for the scientists’ cause than anything else.  “While temperatures do seem to be reflecting an upward trend, overall, the planet is seeing what appears to be more extremes”.

“Whether it’s big snow storms in the north or droughts back home, there’s certainly no denying the past few years have seen some rather significant global extremes”.

But Mr Duncan wouldn’t be drawn into whether or not it was related to the affect humans have had on the planet.  “This is certainly still early days in any trend.  Trends take years, if not decades, to become clear weatherwise however there have certainly been many cases of costly weather events in recent years”.

Media like to sensationalise everything if they can. A snowy European early winter is not unusual, but stories of people dying and roads blocked sell.
When NIWA says, as they did on Friday, La Nina is ‚Äúnotoriously unpredictable‚Äù they really mean they are notoriously unpredictable. Of course they won‚Äôt say that, but identifying some sort of devil makes it a news story.
I suggest we forget La Nina, it means nothing. La Nina is what used to be called the Trade Winds, easterlies blowing across the equatorial band. It is simply the normal situation, nothing unusual. You can‚Äôt have a strong La Nina because you can‚Äôt have strong ordinariness.
Our summer looks likely to be drier later, from mid January to April, with relief rains in May. December should be spring-like, with a few days of good rain falling to relieve dry conditions next week.
In NZ a dry later summer and dry autumn is very common, but lately we have started calling a dry month or two a drought, yet in the past it just used to be called dry summer conditions. Now we hear of the potential for ‚Äúfull-scale drought.‚Äù Some parts of Western Australia have had no rain for 3 years, and even they do not talk of full scale drought, because they know their situation is cyclic.

Of course the cold snap is Climate Change, it has been changing for millions of years, and without the help of good old Human activity.
Ken Ring gets it right when he mentions the word cyclic, that is how things work, in cycles.
Global Warming was changed to Climate Change because the former just did not excite Joe Public, the latter does”t either, it a way to tax the people for what, the existence of CO2, the world is broke so watch what you breathe, they will tax the lot and try to have you live in fear that its changing the world we live in, what a joke, my eyes and mind are onto the tricksters.