Big rain returns for the SI West Coast on Wednesday 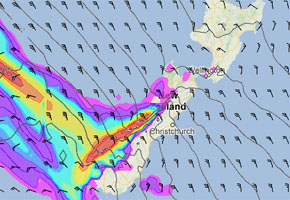 This Wednesday the West Coast of the South Island is set to see further big rain falls in a strong northwesterly airflow ahead of a front moving in from the Tasman Sea, this will be of some concern considering the recent deluge that fell there recently.

Significant spill over can be expected again for rivers on the east coast so levels will likely rise, also expect gale north to northwesterly winds east of the divide in the South Island from North Otago northwards.

Northwesterly winds about Cook Strait will likely gust to gale force from midday.

Keep up to date with any weather warnings issued by Government forecaster Metservice if planning to be in the area on Wednesday this week through until Thursday morning.