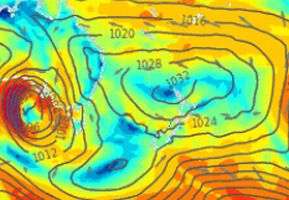 A large high is now moving in across the country and for most regions the winds have now finally eased after a stormy few days.

Windy conditions now lie east of the Chatham Islands and remain in the Southern Ocean, but for the next few days the high not only remains over us but another bubble of high pressure will push through the Southern Ocean – effectively stopping the wild, wintry, weather for a few days.

It will be short lived for some too – like in the lower South Island where winds from the north west will return by Friday or Saturday.  But generally speaking the nation is looking calm and mostly dry for the next few days, with the upper and eastern North Island expected to remain mostly sunny and dry this weekend.

“We sometimes get clouds from the Tasman that can make western areas a little cloudy at times and there may be some rain in the far south west corner of the South Island.  Apart from that, the next few days look perfect for the holidays” says head weather analyst Philip Duncan.

This weekend the nor’westers will become strong in some parts of central and eastern New Zealand, mainly the South Island.

The North Island looks to be mostly mild and settled this weekend but by late Sunday gales are possible in central New Zealand with rain and cloud moving northwards up the West Coast towards Cook Strait and the lower North Island.