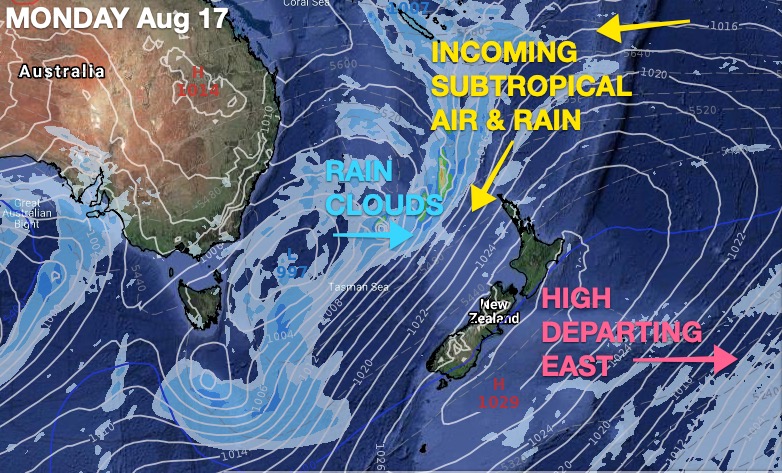 Rain clouds and sub-tropical winds are returning to northern NZ this week, despite high pressure dominating to kick the week off. High pressure skirted past NZ over the weekend and it is today slowly moving out to our east and by the end of Tuesday it departs our shores properly.

Behind it we have a wet sub-tropical northerly flow which gives way to being windy westerly quarter winds by the end of the week.

We also have a pool of low pressure moving into NZ either this weekend or early next week for a time.

This set up will likely feel spring-like, especially in the North Island.

Also with low pressure likely moving into country this weekend or next week one positive for southern NZ is that these set ups can produce easterlies – which may see some rain or showers into dry parts of Southland, Otago and Canterbury from this coming weekend. Keep an eye on RuralWeather.co.nz for more as this set up is changeable next week.

AUCKLAND:
WeatherWatch was the only forecaster last month to produce a somewhat optimistic forecast for our largest city and we continue to maintain more rain is coming.

Latest data from www.RuralWeather.co.nz suggests another 50mm may be possible for Auckland region over the next 10 days.

While Aucklanders still need to conserve water it is positive to see more rain clouds coming.

WeatherWatch.co.nz works with IBM to produce longer range forecasts and are 100% independent of commercial Government forecasters Niwa and MetService.