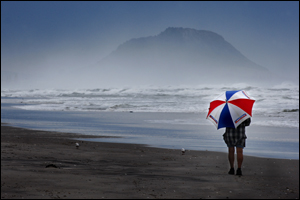 Saturday provided the most severe and wettest weather across the country as a whole for 2013 as exclusively predicted by WeatherWatch at the end of last week.

Dozens of holidaymakers had been evacuated last night from Waihi in the Bay of Plenty using ropes as rising floodwaters threaten to engulf seaside towns.

Nearly 70 people were rescued from the Waihi Beach Top 10 Holiday Resort, including a 12-year-old girl suffering from shock.

Firefighters carried out owner Ian Smith using a rope line because the water had reached 50 to 70cm deep and was flowing fast.

“Some of them were quite upset – there was one girl of about 12 who was showing signs of shock,” said Smith.

A bridge in the small Bay of Plenty town was washed out and a car was caught in slips along nearby Trig Rd.

Two young women were rescued from the roof of their car after they became stuck in floodwaters on Waihi Beach Rd. Another woman in another car was also rescued.

Responding to reports of a slip on Waihi Beach Rd, the fire service found another car caught in the slip with the motor running and the back window kicked out.

Bay of Plenty residents were braced for a night of flooding as torrential rain continued last night.

Sandbags were distributed to owners of waterlogged homes in Mt Maunganui after floodwaters reached 1m deep.

Fire chiefs set up a welfare centre in Tauranga for flood evacuees.

WeatherWatch believes Sunday is also looking wet with further heavy falls likely across parts of the nation but an easing in eastern districts is on the cards however other areas could see more belts of rain move in.

Parts of the Bay of Plenty saw over 150mm across the day and evening with flooding resulting but perhaps not a surprise with such intensity about.

Surface flooding on roads was also noticeable at one point over both Auckland and Christchurch with the northern city seeing torrential showers yesterday afternoon/night and the Garden city seeing a band of widespread rain.

The last set up like this was about six months ago and some areas are struggling to cope with the deluge as it’s hitting hard ground and running off.

well here in Tuakau I have recorded just over 16mm of rain in the last couple of days, not a drought buster for us yet!

What’s the weather looking like for Dunedin? We had steady drizzle Friday afternoon but since ten been mainly dry. Still cloudy, cold and since last night windy.

The rain still continues but is light after a quieter evening were we got some sleep instead of bailing out our basement. I have recorded weather for over 20 years and the is right up there with rainfall figures.Since the storm started we have accumulated a massive total of 327mm, 250mm of that being recorded in two 3 hour busrts

I would assume this means the drought is over 🙂

Yes we agree the drought’s certainly broken and what impressive totals from this event.

Appreciate the update and stay as dry as you can!

There are many other areas in the country who have not had the rain you have had still wishing for good rain.
The drought may be over for you but not for some of us!